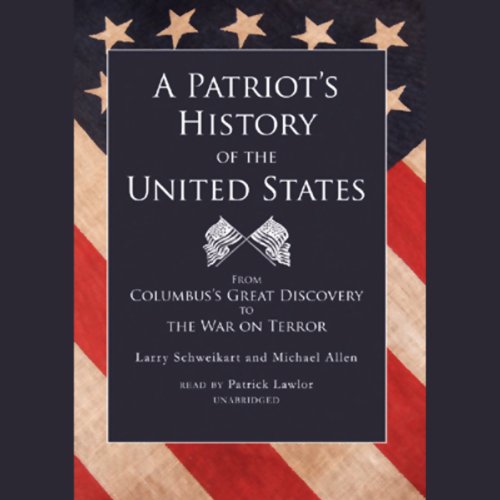 A Patriot's History of the United States

Since the liberal revolution of the '60s and '70s, American history books have been biased toward the negative. They overemphasize America's racism, sexism, and bigotry while downplaying the greatness of her patriots. As a result, more emphasis is placed on Harriet Tubman than on George Washington, more on the internment of Japanese-Americans during World War II than on D-day or Iwo Jima, more on the dangers we faced from Joseph McCarthy than those we faced from Josef Stalin.

This book offers a long-overdue acknowledgment of America's true and proud history. The authors reexamine America's discovery, founding, and development with an appreciation for the principles of public virtue, personal liberty, and private property that have made this nation so uniquely successful.

"A welcome, refreshing, and solid contribution to relearning what we have forgotten and remembering why this nation is good, and worth defending." (National Review)
"There are a thousand pleasant surprises and heartening reminders that underneath it all America remains a country of ideas, ideals, and optimism: and no amount of revisionism can take that legacy away." (Humane Studies Review)
"Larry Schweikart and Michael Allen remind us what a few good individuals can do in just a few short centuries....A fluid account of America from the discovery of the continent up to the present day." (Wall Street Journal)

About What You Would Expect

It was a refreshing departure from the "History" that is taught in colleges these days. It focuses less on racism, prejudice, and bigotry and more on politics, war, and the home. The obvious conservative bias makes it a little difficult to take seriously primarily due to the author's treatment of Clinton and George W Bush. Up until that point in the story, I was right with him in what seemed like a pretty fair assessment of major events in US history. The events of the recent past (with the exception of 9/11) don't seem as critical in the story of the country as other major past events, but one would not be able to make that determination based on the relative amount of time spent by the author in recounting this period.

This volume contains only stories you've heard before... occasionally with some new insight, but basically the same stuff you learned as an elementary and junior high schooler. Weren't there any unsung heroes in American History that aren't household names?

The depictions of the Civil War and the New Deal provided insights and opinions that I had never heard before.

Was A Patriot's History of the United States worth the listening time?

It was quite long... but I spend a lot of time in the car. I wanted a start-to-finish history of the United States, and that's what I got. This can't be done in a shorter time period and still be worth listening to.

I would recommend this for the younger generation who probably hasn't heard some of these stories due to the changing curriculum in primary schools and to anyone who is tired of hearing that American is history is simply a story of racial bigotry and hatred.

Are there other responses to Zinn’s book?.?.?.

I liked this. And I think it’s important to read,especially if you have read Zinn’s book.

Because this was written in response to Zinn’s book, there are points where I feel the writer is defensive and I think that’s weird. But this is a great book if you like our country and want another perspective on US history.

This makes me want to read Zinn’s book again and other responses to it. Only in this country can we have so many published perspectives. We have the greatest country, even with all of its problems.

We are all Patriots

I’m pleasantly surprised with the intensity of passion and diversity of opinion from the reviewers who posted their comments here. It is an affirmation of what the author of this book is saying. The heart of American patriotism lies in our self proclaimed right to express ourselves. Right or wrong, Americans have had the strong will to stand up and take action. This book is an account of that American will. I highly recommend this read. We have a unique history. I chuckled at the account of how Europeans considered American colonists to be unrefined and lack class. As pioneers we have never dressed to impress. Our culture is rooted in a pragmatic approach to living, with special emphasis on the rights of the individual. Americans think differently than the rest of the world. History helps us recognize why. We protect our social freedoms and economic security with a 230 year old political system of checks and balances, laws, not kings, or dictators. Americans trust that system of laws where so many other nations have self destructed with violence. We don’t live in a perfect world. This book does not propagandize us as such. Mistakes and injustices are exposed. Men of genius and character are recognized. And just for the record, I am not of the politically right. I was not offended by this author’s perspective. My interest was kept as he explained how we created a system to challenge the unjust, employ reason and critical thinking to self analyze, to right the wrongs, to blunder, admit it, and pick ourselves back up, to be cautious when it came to starting the fight, but recognize when the time is right to come together with formidable strength to protect what we all know to be “self evident truths”. With eyes wide open, republican conservative, or liberal democrat, we are all patriots.

If you're going to read the likes of Howard Zinn and his ilk, you need to also read this!

A breath of fresh air

Would you listen to A Patriot's History of the United States again? Why?

Yes, the story line is compelling.

The story flows well from one decade to the next.

This book is a comprehensive and detailed arrangement of our history. It helped me understand so much about the events that we learn (dumbed down version). This book should be a textbook in schools today.

This book confirmed many suspicions I had about American history and I thoroughly enjoyed the book. well written and we'll narrated, I would recommend this.

Great Book even though it skews right

I really enjoy this book. As with all history, I probably need to read a few others to determine how great it was or how biased. Wealth of information and wonderful overview. Very readable

This book from start to finish was filled with great accounts of American ambition, innovation, faith, determination, and hope that drives this country forward. The authors were wonderful in their vision create an accurate portrayal of American events showing both America's faults and its greatest achievements. I would recommend this book to anyone that enjoys history. It is a long book, but well worth the time. The narrator keeps you listening and the stories are not dull because the authors do not drown you with names and dates every other sentence. If you have the time and truly want to learn about American history than look no further.

I have been looking for a "potted" history of the United States of America and stumbled across this. Since I had a credit to use I thought, "what's the worst that can happen?" thinking that 50 hours of audio for 1 credit, it must be quite poor.

I have to report that both the subject matter and the narrator bring this subject to life in a way I never thought possible. If you are interested in American history (or history in general) then this book is an essential purchase.

The subject is read in more or less chronological order making it easy to follow and interesting at the same time and you start to be able to see to the roots of issues that present themselves later on.

Expertly written and read, making for an enthralling experience from start to finish.

Although like most historical works written from a particular perspective, it was well constructed and very well read. Its length can be daunting but it is read at a pace that keeps you interested and is not overly full of facts. It covers the main points as you would expect. If you are looking for something to give you a good grounding in American History and as long as you bear in mind its conclusions are from a particular perspective you will not be disappointed by this work.