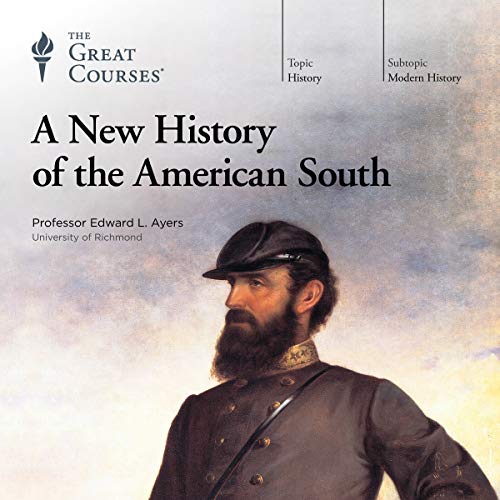 To know the history of the American South, within its own context, is to come to terms with one of modern history’s most astonishing, polarizing, and illuminating stories. In these 24 lectures, you’ll relive the unforgettable drama of the South, from the rise and fall of the slave South to the making of the New South, examining the full scope of a historical epoch that still affects life in the United States today, through essential topics such as:

The Forging of the Slave South - Follow the settling of the Southern colonies and the economic conditions that made slavery a profitable business model; see how the slave economy expanded following the American Revolution

Southern Prosperity and Culture - Witness the creation of the large-scale cotton economy that emblemized the South; learn how the enslaved lived and worked and the ways in which slaves rebelled against a dehumanizing system

Breakdown of the Union - Examine the events that marked the disintegrating relations between North and South, from the emancipation of the Northern states to the divisive presidential election of 1860

Segregation and the New South - Observe how political and legal means were employed to separate the races and maintain white supremacy; explore how the New South gave rise to religious and musical expression of globe-spanning impact

In A New History of the American South, you’ll take a richly detailed excursion into the story and the enduring legacy of the South, in a historical inquiry unique in its scope. In Professor Ayers’s words, “We cannot understand the United States if we do not understand the South, which has played such an outsized role in the history of our country.”

The lecture is great! Full of interesting facts but doesn’t overload you. The professor knows how keep you focused at all times too. A great source of different points of view. I would recommend to anybody interested in that subject. I wouldn’t mind listening to it again at some point in the future. Worth getting for sure. Thank you for the great course!

Prof. Ayers presents a well-organized and concise history of one the most historically complex regions in the U.S., weaving economic, political, and cultural threads together in a clear and convincing manner. Thankfully, the brutal facts of racial oppression defining the region are not white-washed here but rather illuminated so that the changing forms of racial subjugation that appear in different decades begin to become more unified and comprehensible if no less repugnant. Many listeners will find their assumptions challenged, and that’s a very good thing.

I was disappointed by the relentless and overwhelming focus of this book on slavery and its implications, to the detriment of all other aspects of the south and its history. Dr. Ayers seems to believe that the only thing worthy of interest to happen in the American South is slavery. While important, it's not all of the story. Let's have some truth in advertising and just call this a History of the African-American in the South. I'd still read it, but I wouldn't have been subject to such an overt bait and switch.

Excellent look at the history of the South. Narrator speaks smoothly and has lots of excitement for the subject. While this is very helpful, it doesn't cover much past 1900.

Pleasant delivery. Unbiased analysis. A comprehensive overview of the history of the American South.
That's all, folks!

Overly focused on slavery, which certainly isn't a new or surprising issue. Also, the at times dramatic, breathless reading didn't appeal to me.

This audiobook/Great Course is timely, gets into many of the micro and macro details of the Southern United States from pre-European settlement through the turn of the 19th century. It also provides a few great reminders.

The first was that our founding ideals were and still are aspirational. We continue to struggle with universal freedoms that align with those ideals. Our Founders knew we would need to purposefully modify the Constitution based on national emotional growth; the impact of science, technology, and knowledge; and the limitations of the times within which the documents were written.

The second great reminder is that while the legacy of slavery is an issue we still deal with, the South was by no means the only contributor to the legacy – the North had its own part to play from negligence to hypocrisy to enablement.

Lastly, an underlying and unifying theme of this Great Course is that we, as a country, are persistently and unfailingly late to address issues that we know to exist. From the Founders to today, we often rely on future generations to address everyday real-world problems. If we want to close the gap between who we are and who we aspire to be, we’ll need to close the timeline between actively identifying issues and addressing those same issues – or we will purposefully regulate ourselves to perpetually falling short of our potential as a nation.

Focused too little on important aspects of Southern History, no discussion of Civil Rights movement.

Good overview of the South

Ayers is truly excellent, and the course is well researched and beautifully articulated from the early southern colonies to 1900, well worth it for beginners

What Happened to the 20th Century?

The book is well written and informative. But I was surprised to have it end so abruptly. maybe I missed the information up front that the 20th century would not be covered, but it came as a disappointing surprise to me.

I knew little about the subject before being enlightened by the course. The aftermath of slavery seems to have been prolonged servitude. But this is put in the context of the diverse cultures of the states at the time. A humane and empathetic story.