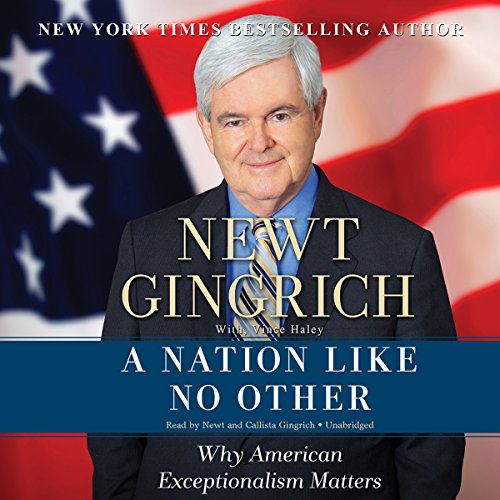 It’s become fashionable among the liberal elite to downplay, deride, and even deny America’s greatness. The political correctness police insist that America is hated around the world for being too big, too powerful, too rich, too successful, too loud, too intrusive. And besides, it’s not nice to brag.

America’s greatness, America’s exceptional greatness, is not based on the fact that we are the most powerful, most prosperous—and most generous—nation on earth. Rather, those things are the result of American Exceptionalism.

To understand American Exceptionalism, as Newt Gingrich passionately argues in A Nation Like No Other, one must understand our unique birth as a nation. American Exceptionalism is found in the simple yet utterly remarkable principles expressed in the Declaration of Independence: “...that all men are created equal, that they are endowed by their Creator with certain unalienable rights, that among these are life, liberty, and the pursuit of happiness.” Our nation is exceptional, continues Newt, because we—unlike any nation before or since—are united by the belief and the promise that no king, no government, no ruling class has the power to infringe upon the rights of the individual. And when such a government attempts to do so, we will vigorously reject them.

Sadly, many politicians and leaders today have forgotten our sacred commitment to these ideals. Our government has strayed alarmingly far from the scope of limited powers framed by our Founders. Meanwhile, the liberal media seek out, and sometimes create, stories intended to portray America as a bully and a thief. Even our own president seems clueless, assuring us that yes, yes, he believes in American exceptionalism, just like the Greeks believe in Greek exceptionalism and the British in British exceptionalism.

But American Exceptionalism is not about cheerleading for the home team. It’s about recognizing and honoring the history-making, world-changing ideals our Founding Fathers enshrined to make this a nation of the people, by the people, for the people. And, as Lincoln warned, we must rededicate ourselves to those principles, lest our truly exceptional nation perish from this earth.

Cosa pensano gli ascoltatori di A Nation Like No Other

Understanding what is Great about America

This was such a pleasure to listen to! It was greatly enhanced by listening to the Gingrichs.

A Blueprint for Conservative Movement

Of course Newt is preaching to the choir with most listeners/ readers of his works. I hope the movement regains momentum to save the American "experiment" as intended by founders. Correcting the liberal misguided even well intentioned policies to avoid insolvency and demise is nothing short of our survival as a nation. Stay well and vocal Newt. m
May you have many more years espousing clear thinking commentary.

An important, relevant book in our time

I thoroughly enjoyed this well written and researched book on what it means to be American! We are are truly blessed to be citizens, but with that blessing comes much responsibility. The author lays out many clear and concrete tenets of what it means to be an American and how to actively walk the walk. Highly recommend. Only downside, in my opinion, is the alternating narration between the author and his wife. I personally found it a little distracting.

Ideas and examples for a better America

What made the experience of listening to A Nation Like No Other the most enjoyable?

Having two voices made the experience much better. In fact, I would have liked even more interplay. The positive ideas and examples of same are inspiring.

Have you listened to any of Newt Gingrich and Callista Gingrich ’s other performances before? How does this one compare?

This book is proof that there IS a better vision for America than the one we are currently being force-fed by some politicians and the unelected bureaucrats.

What made the experience of listening to A Nation Like No Other the most enjoyable?

Newt provides a bold historical perspective of the history of American Exceptionalism. If you have lost faith in this country and need to reboot your internal Patriotism, this book will do it.

What does Newt Gingrich and Callista Gingrich bring to the story that you wouldn’t experience if you just read the book?

Newt's bold presence is enjoyable to listen to and makes the historical journey through American history.

This book is so good, you will find great moments throughout the book.