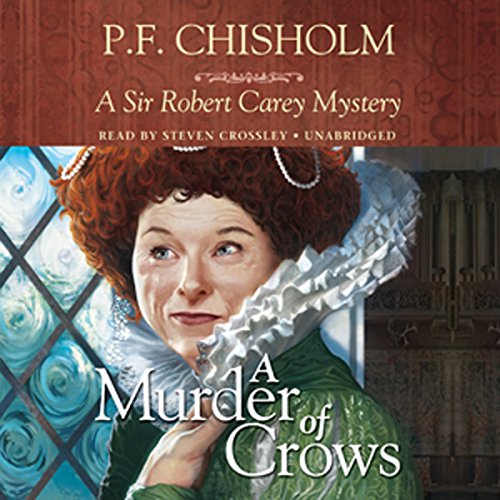 It’s September 1592, and the dark streets of London are full of people up to no good. The redoubtable Sergeant Dodd and that dashing Elizabethan gunslinger Sir Robert Carey are in London where Carey’s powerful father, Lord Henry Hunsdon, wants him to solve the mystery of a corpse that has washed up from the Thames River onto Her Majesty’s privy steps. Meanwhile, Sergeant Dodd is plotting how to take suitable revenge for his mistreatment by the Queen’s Vice Chamberlain, Thomas Heneage. But no lawyer will sue against such a dangerous courtier—until a mysterious stranger offers help with suspicious eagerness. Now, Sergeant Dodd has to help Carey find the identity of the corpse and its murderer, while bringing a little taste of the Borders to his dealings with Heneage.

Seems like a series but where are the other books?

The story is fun, the characters are the best part, and their relationships, to each other, to their families. They've clearly got a history. But where are the rest of these books? I finished this one, relishing picking up the next in the series (the title clearly indicated a series) but there's no more in the Audible library. Ack! Don't do this to me! I want to know what happens to these people next!

Main Character Missing in Much of the Book

A Murder of Crows is an excellent book, and for the most part, I enjoyed listening to it. Sir Robert Carey and Sgt. Dodd are a believable duo. I was fascinated to learn that Robert Carey and his family, as well as all the bad guys, are all historical personages. My criticism is that about 2/3 of the way through, Carey departs for a mission and never reappears. Obviously this is a setup for another book but it happens too early in the story, considering it is "A Sir Robert Carey Mystery." Added to that, there are no more audio books available, though there are four additional paper volumes. I liked it enough I might continue reading the series

Steven Crossley also narrates the Matthew Shardlake series set in same time period. He is one of my favorite narrators.

It was at first a little difficult to pick up the plot but the more I listened the more I enjoyed the characters, the setting, and the narration. You learn very quickly to speak "Dodd". I liked all the references to personages of the time period. I thought the story worked quite well and hope to see more available through Audible in the future.

it gets better toward the end

somewhat interesting story that drags at the beginning. the historical parts are the most interesting. not a book I would read , or listen to, again

Strong main character but hard to keep up

There are a few things the author assumes the reader knows as it relates to the Royal Family circa 1600. I didn't know them so I was a little lost at the beginning but was able to pick up the important stuff a few chapters in. Then, towards the end of the book, one of the two main characters just takes off with little to no explanation and we never hear from him again. It's an interesting read if you like historical fiction, but the plot lines are all over the place and/or just fade into nothing.

where are the rest!?!

great story and well narrated! lots of interesting details of life from the Elizabethan era

I will be reading more by this author. complicated and intriguing story. The gentleman doing the performing was one if not the best I ever have had.

I desperately want the entire Sir Robert Carey series in audio. This narrator did a lovely job with the battling accents. The story is one of my favorites. And Dodd is always a treat.

This is just plain good.

I wanted to stay up all night and listen to this. Combines story line with great humor. Really enjoyed it. Am looking forward to reading more by this author.

I threw it away

I can work with a bad story, at least for a while. The accent the narrator gave Sergent Dodd may well have been accurate but it was awful to listen to. O took it for half and hour then threw the CDs away. I have no idea what the Dodd character said. It was impossible to understand.