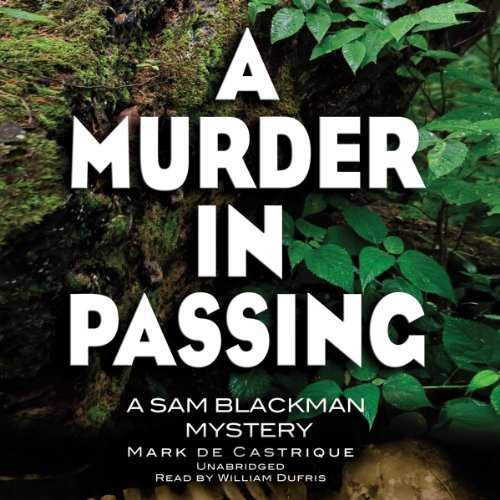 A Murder in Passing

In Asheville, North Carolina, the Blackman & Robertson Detective Agency faces a disturbing reality: no clients. Sam Blackman finds inactivity intolerable, so when partner Nakayla Robertson suggests a mushroom hunt on the site of a historic freed-slave commune called the Kingdom of the Happy Land, Sam reluctantly agrees. When he stumbles across a skeleton, his adventure mushrooms into a case of murder. But it isn’t his case - he has no client - and the local authorities tell him to butt out.

Then Marsha Montgomery comes to the office asking Sam and Nakayla to investigate a burglary at her mother’s home. In 1967 someone stole a rifle and a photograph of Marsha’s mother, grandmother, and great grandmother taken in 1932 by renowned photographer Doris Ulmann. Marsha’s visit is no coincidence: The photograph was taken at the Kingdom of the Happy Land. Sam’s being played, but why?

When Marsha’s 85-year-old mother, Lucille, is arrested for murder, Sam has his answer and his case. Is the skeleton that of Jimmy Lang - Lucille’s lover and Marsha’s white father - who disappeared in 1967? Jimmy’s brother says no; Jimmy left to seek his fortune after Lucille rejected his marriage proposal. But others stood to gain from Jimmy’s disappearance.

A veil of betrayal and deceit hides a killer desperate to protect a dark secret, and no one - not even Sam - is safe from the deadly consequences.

. In this fourth outing of Iraqi war veteran Sam Blackman and his partner Nakayla Robertson, Mark de Castrique has done another exemplary job in wrapping a bit of North Carolina history inside an intriguing mystery.

The fourth B & R mystery (see The Sandburg Connection, Blackman's Coffin and The Fitzgerald Ruse) is as good as the others.
I enjoyed the living history which is shown by the people from the nursing home. I love the Captain and all the rest. The Mayor is a treasure
I have listened to all of his books and this one will not disappoint.. It was quick and enjoyable.