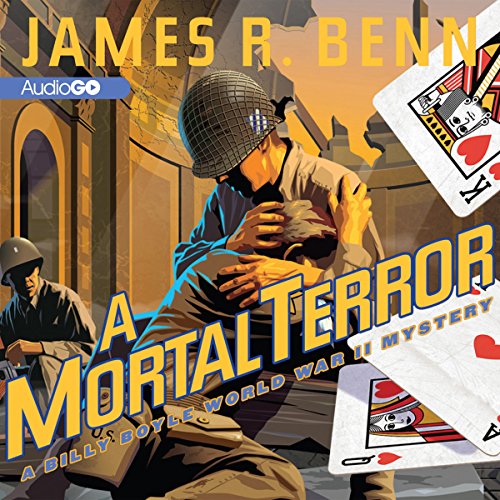 Two officers from the American troops stationed in Caserta, Italy, not far from Naples, have been found murdered. The MOs are completely different, and it seems like the officers had no connection to each other, but one frightening fact links the murders: each body was discovered with a single playing card: the Lieutenant, the 10 of hearts; the Captain, the jack of hearts. The message seems to be clear: If the murderer isn't apprehended, the higher ranks will be next.

Billy is sent to Italy for the investigation, which grows increasingly sinister. But he has other things on his mind, too. His girlfriend, Diana, is on a very dangerous spy mission, and Billy doesn't know when - or if - he'll see her again. To make matters worse, Billy's just learned that his baby brother, Danny, is being sent over to Europe as an infantry replacement, an incredibly dangerous assignment. And all around him, he sees GIs suffering from combat fatigue preparing for another battle. As the invasion at Anzio begins, Billy needs to keep a cool head amidst fear and terror as the killer calculates his next moves.

The narrator changed. While he may be very good I was confused. The charecters that I knew didn't sound the same. I couldn't follow the story because of this. I didn't listen to more than 2-3 chapters.

What was most disappointing about James R. Benn’s story?

I didn't follow the story because Billy Boyle wasn't the same.

No. I couldn't follow the story and didn't finish the book.

Less the the previous books

I too had a hard time with all the American characters suddenly having Southern accents. The story is also not as good as the previous book. The ending was very interesting, but disappointing to me.

What would have made A Mortal Terror better?

Woeful narration. Voice is wrong and pace off. Wait for Marc Vietor to return.

Would you be willing to try another one of Peter Berkrot’s performances?

Changing narrators is not a good thing

What disappointed you about A Mortal Terror?

It's the Boyle series I know and love, but Billy has changed. There's a new narrator and I really think the audio book suffers for it.

Who would you have cast as narrator instead of Peter Berkrot?

Mark Vietor is Billy Boyle. That's the only person who should narrate this book. From the Boston accent to the Southie attitude. He had it and made the Benn books come alive.

I'm well into the book but only through sheer force of will. I find myself uninspired to continue to listen.

this is an okay entry in the series

it's an interesting look at anzio and historical implications of it with World war II. I felt there was a regression in the character development of Billy Boyle after his last book situated in Ireland. when we left that character he was very much a sober adult mature and moving in a good direction. in this book it was almost like a regression of those personality traits to where he was in the first book, it was disappointing the same with the other characters in the book. that may have to do with the audio performance. it was not good where the previous books the actor by the name of Mark Vector gave the performance he was able to very much differentiate the characters with his voice and the character development. you could very easily tell boil was from Boston and the British were British in the Polish were Polish ... it was almost like somebody was reading in one voice for the entire performance so you had to be very carefully listening so you can follow the characters. After the earlier performances it was very disappointing and really might have affected my whole appreciation for the book.

storyline was what I expected

the narrator should learn how to read. British intelligence is not m 15 but MI 5. I can understand one of my kids making this mistake the oldest one is only 5, but when your paid to read a book ya should at least be able to read.