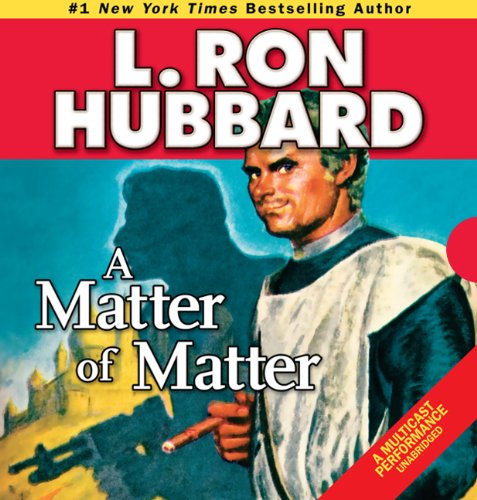 A Matter of Matter

When it comes to big dreams and schemes, young Chuck Lambert would give Walter Mitty a run for his money. In fact, Chuck’s biggest dream of all is really out of this world. Because he’s got his eyes on a prize in the sky. Chuck wants to buy a planet of his own….

Madman Murphy, the King of Planetary Realtors, is more than happy to oblige. He’s got a whole galaxy of planets for sale. All Chuck needs is money . . . and a lot of it. Eleven years later, saving every penny he can scrape up, Chuck’s dream comes true. He takes possession and takes off for Planet 19453X….

One problem: Madman Murphy has sold Chuck a world of trouble. Because on Planet 19453X the water is undrinkable, the air is unbreathable, and the laws of physics don’t apply. Has Chuck’s dream turned into a nightmare? Not quite. As he’s about to discover, sometimes, to fulfill your true desire, it’s simply a matter of digging a little deeper….

By the time A Matter of Matter appeared in 1949, L. Ron Hubbard’s stature as a writer was well established. As author and critic Robert Silverberg puts it: he had become a “master of the art of narrative.” Hubbard’s editors urged him to apply his gift for succinct characterization, original plot, deft pacing and imaginative action to the genre of science fiction and fantasy. The rest is Sci-Fi history.

Also includes the science fiction adventures, "The Conroy Diary," in which the man who opens up the universe to mankind also opens himself to charges of fraud and tax evasion; "The Obsolete Weapon," the story of an American GI involved in the 1943 invasion of Italy who slips back in time and finds himself fighting a different kind of battle—as a gladiator in ancient Rome; and "The Planet Makers," in which a great deal is at stake for the engineers who make planets habitable, but one of them has a surprising plan all his own.

This is a really fun dramatizrd audiobook.
A Matter of Matter, The Conroy Diary, and The Planet Makers were a joy to listen to. They brougt me back to those old pulp mags I used to be able to buy at the drugstore that sold comic books.
Obsolete Weapon was, well, three gooders out of four ain't bad.

What did you love best about A Matter of Matter?

It may be dated, but still insight into the mind-set of people of the time it was wrote.

What was one of the most memorable moments of A Matter of Matter?

Floating..... and that is it least I spoil it for you.

Yes, and this one is well done also.

I was unsure before I listened but really enjoyed the stories, the touch of comedy and the great audio show. Highly recommended.