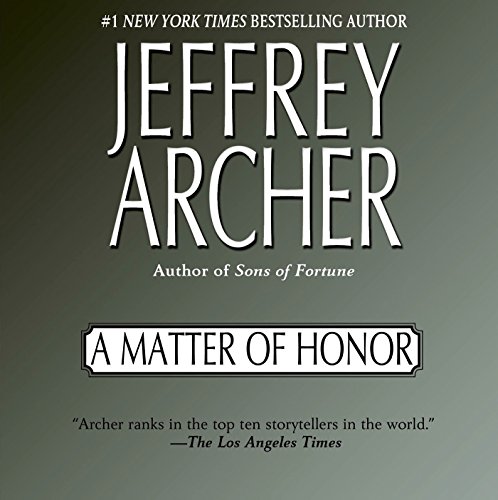 A Matter of Honor

A disgraced British colonel bequeaths a mysterious letter to his only son. The moment Adam Scott opens the yellowing envelope, he sets into motion a deadly chain of events. Within days he's running for his life, pursued by the KGB, the CIA, and his own countrymen. Powerful men plot his destruction, and Adam is betrayed and abandoned even by those he holds most dear. When he finally realizes what he possesses, he's even more determined to protect it, for it's more than a matter of life and death - it's a matter of honor.

Claims re missing or duplicate chapters are wrong

Would you consider the audio edition of A Matter of Honor to be better than the print version?

I really like Jeffrey Archer's work, and have read almost every one of his books. But I had hesitated to order "A Matter of Honor" due to multiple reviews claiming that the recording had been "messed up" because chapters were either missing or duplicated. I contacted Audible regarding this problem and was advised that no information as to whether it had been corrected was available. After more than a year, I went ahead and ordered the book. I am pleased to report that there are no missing or duplicate chapters, and that this was one of the best Jeffrey Archer books I've yet encountered -- I really enjoyed it. The plot was quite imaginative and the performance was first-rate.

Whatever the problem was with this recording -- if indeed there ever was one -- it has apparently been corrected. There are no missing or duplicate chapters. Audible does a serious disservice to readers by retaining these now-inaccurate reviews on its website. If Audible does not remove these inaccurate reviews, you should definitely ignore them.

Chapter 24 was a repeat of a previous chapter so a chapter was missing near the end of the story.

Something went very wrong with this recording. It kept jumping back to early chapters which were repeated, this spoiling the continuity of the story. Also vital parts of the story were lost altogether. My usual enjoyment of all Jeffrey Archer's books was on this occasion spoiled.
Please sort out and remedy this glitch. Also the narrator seemed to change in the middle!!!!

DO NOT BUY!!! THIS RECORDING IS MESSED UP

There are missing chapters in the book and some of them repeat. It makes the book very hard to follow and disappointing that the recording company hasn't fixed it.

Several places in the book were interrupted with audio from prior chapters, then fast forwarded to the "next" chapter. Lost some of the storyline. A good book but they need to spend some time listening to what they put out and we pay for.

The first few minutes of listening were hard to follow - and I almost stopped .
But then wow it sucked me in and was nonstop action until the end! It did end just a little abruptly and could have had a couple more chapters to tie everything up a little better. But I thoroughly enjoyed the story and the characters he met while on the run. One chapter was very hard to listen to and I did have to fast forward. Other than that I highly recommend! The narrator John Lee was awesome as always!

The story is interesting to listen to, but towards the end of the book chapters repeat from the beginning. Disappointing, but more of an issue for the company performing than a negative comment on the book itself.

The beginning was hard to keep straight and, hence, to become engaged with. The narrators attempts at various accents also made it hard to keep characters straight (the LBJ accent was particularly bad, though unmistakable since he was the only character with a Texas drawl.

I found the ending abrupt and disappointing. Too much of the “solution” was unexplained.