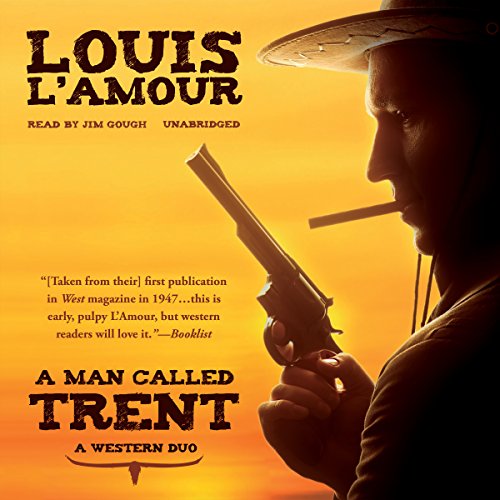 In "A Man Called Trent", nester Dick Moffitt lies dead, killed by King Bill Hale's riders. His son Jack and adopted daughter Sally, who witnessed the murder, go for safety to a cabin owned by a man called "Trent" - an alias for Kilkenny, who is seeking to escape his reputation as a gunfighter.

In "The Rider of Lost Creek," Lance Kilkenny is the fastest gun in the West, but once the gunfight is over, he disappears. Some time back, Mort Davis saved Kilkenny's life. Now Davis needs Kilkenny's help with a pair of feuding ranchers taking over his property.

The books will be in chronological order if you listen to the second one first at chapter 21. I did not know that but enjoyed them anyway.

killkenny is one of my favorites

Jim Gough is by far my favorite western narrator

Stupidly put the stories out of order.

Instead of putting the stories in chronological order, they start with the later book, then go back in time to an earlier story. Such a ridiculous mistake.

the narration was horrible. The story is slow

the narration was horrible. The story is slow which is uncommon for a Louis L'Amour adventure. I think the narration is what made it the most unbearable. unfortunately I've waited too long to exchange it.

Books out of order

classic L'Amour. 2 books in one title but in the track these are reversed. start with the 2nd half for correct chronology

Yes due to the fact that from the very first, the characters are introduced and as the story progresses each feeling is described.

What was one of the most memorable moments of A Man Called Trent?

When Trent discovered he was a man of the west with specific values that he would fight for.

Who was the most memorable character of A Man Called Trent and why?

Trent, because he had enough forsight to realize that just being a fast gun wasn't enough. He knew the true gun fighter should stay in the background.

It's a good solid western story. I enjoyed it in spite of the fact that the old cowboy who read it, read the words more than sentences or the story as a whole. He both set the western mood and chopped up the flow.

The events of the 2nd book precede the 1st. No idea why they did that. Sorry I didn’t notice the time stamp, but scroll through and listen to the 2nd book, then go back to the first. I’ve read all these books multiple times, but it’s been a long time. Listening to them is a real treat. Enjoy.

This Book is very good. There is two stories in it. KilKenny is an excellent gunfighter. This book will keep your interest from start to finish. I highly recommend this book. Jim Gough is an excellent narriater. He has a good western voice. This is my first book on Kilkenny I will get all books about him
If my review is any help will you please click on the helpful link below
Thank you.

The two stories of this book are presented in reverse chronological order in this recording (ie the wrong way round) but if you like two-fisted, QuickDraw westerns this book will scratch that itch pardner

Great couple of stories that are well read which helped me complete a long drive.

haven't read a Louis L'Amour story for years and have now finished 2 in one book. only regret that the 21deg of the 2 stories is not reversed. My suggestion is you listen to the 2nd one first.

Two enjoyable stories. As with many L'Amour titles, the plots are essentially similar - fast draw good guy takes on the baddies, with a little help and a beautiful girl in the background. Be honest though, that's why we love L'Amour. BE AWARE though that whether it's Audible or the publisher, for some reason the story that is second on the recording is actually the first chronologically, which is slightly annoying.