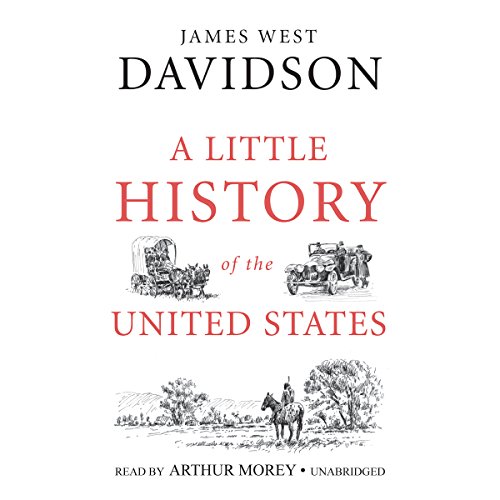 A Little History of the United States

How did a land and people of such immense diversity come together under a banner of freedom and equality to form one of the most remarkable nations in the world? Everyone from young adults to grandparents will be fascinated by the answers uncovered in James West Davidson's vividly told A Little History of the United States.

Davidson guides listeners through 500 years, from the first contact between the two halves of the world to the rise of America as a superpower in an era of atomic perils and diminishing resources.

In short, vivid chapters the audiobook brings to life hundreds of individuals whose tales are part of the larger American story. Pilgrim William Bradford stumbles into an Indian deer trap on his first day in America; Harriet Tubman lets loose a pair of chickens to divert attention from her escaping slaves; the toddler Andrew Carnegie, later an ambitious industrial magnate, gobbles his oatmeal with a spoon in each hand. Such stories are riveting in themselves, but they also spark larger questions to ponder about freedom, equality, and unity in the context of a nation that is and always has been remarkably divided and diverse.

Davidson's little history - part of a series apparently inspired by Gombrich's little history of the world - captures the essence of some of the critical issues of American history. He focuses on freedom and equality and how those concepts played out through the Revolution, the conflicts over slavery, the robber barons of the industrial revolution, the many crises of the twentieth century.

The narrative is mostly political and social, at the expense of military history: the battles of America's many wars race by at triple speed. The politics are described concisely and the coverage is broad, although I felt a gap in his discussion of the early Republic. The Constitution was like a musical score: the actual working government, and the implementation of checks and balances, had to be assembled almost on the fly. Davidson doesn't linger over the details of this process as much as I wish he had.

Arthur Morey has a great voice for this kind of straightforward historical narrative. He manages to sound objective without sounding passionless. It's a brisk and informative introduction / review.

This is just an amazing book when you actually read it. Its gives you a good gist about the world and history on it.

I bought this book, sadly, by the recommendation of another teacher I happened to meet at an history AP conference. This was one of the worst narratives on US history I’ve ever read. Honestly, textbooks are slightly better. The author glosses over, often inaccurately, difficult human rights moments in American history. There are so many errors with basic skills like cause and effect during the chapter on the civil rights era and others. Ww2 and the Cold War were awful. I almost wanted to stop listening after that chapter. Every time this author could offer some social justice history he failed miserably. Rosa Parks didn’t start the Civil Rights movement she was not just a seamstress but was a secretary for the NAACP. Brown v Board provided a legal bias to challenge Jim Crow segregation. JFK did not come up with the idea for voter registration as is alluded. Simply stuff to include even in a simple history book. It’s hard to be considered a credible historian without an honest, objective perspective on American history. Editorializing and choice words of bias by the author. Save your time and money, awful work here. I would donate this book but disagree with it’s contents too strongly to spread.

For a short history, its striking how much time is given to individuals like Rachel Carson, and it ends with comparing nuclear war to global warming.

Excellent & engaging history of US

Captured not only the important stories of our past but at a relatable level for both novice and someone more studied in history so that both sets of readers will get much more understanding out of our past.

So often it’s hit or miss with an narrator but Arthur Morey made a good book great for me. Not being from the US, I’ve always wanted to familiarize myself with this history of the country I now live in and understand a little more why people think and believe the way they do. This book, for me, provided a good overview without getting too into the weeds on certain topics and helped clarify important events.

Help Write the Future US History

Will future US history look significantly different than the past? Not if you don't read about the past and act accordingly to ensure the future is better overall.

I’ve studied USA history many times in my lifetime, and yet, I’ve either forgotten or never been exposed to several facts and stories in this phenomenal book. It is written so well, and the story is so amazing, that it’s a real page-turner—the best kind of “reality” reading as opposed to much frivolous and worthless “reality TV.” I highly recommend this! It exposes the good and the bad about US History, and you won’t want to put it down nor stop listening.

With the familiar voice of a truly talented narrator, “A Little History” takes you through the centuries of exploration, exploitation and development of this vast land, balancing the very good with the very bad, in order to get to where we are today. The author does not ignore or bypass the wars which always seem to come out in other history books as the major historical markers, but they are given similar cultural and political significance as the treatment of Native Americans, the abolition of Slavery, Reconstruction, the influx of millions of immigrants, Civil Rights movements, landing humans on the Moon and the advent of the Atomic Age. For all of its faults and imperfections, the author leaves the reader with no doubt that America is exceptional.

Loved this book. No knowledge prerequisites, except, maybe, for basic grammar concepts. Very informative. If I dare, I have one little correction: romanian kept the article at the end of the noun (e.g. "the man" is "omul", instead of "ul om"), because of its Latin heritage, not because it was influenced by the surrounding slavic languages, as stated in this course.