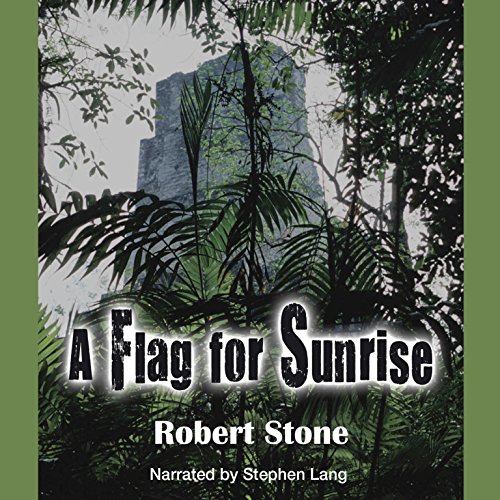 Possessed of astonishing dramatic, emotional, and philosophical resonance, A Flag for Sunrise is a novel in the grand tradition about Americans drawn into the maelstrom of a small Central American country on the brink of revolution. From the book's inception, listeners will be seized by the dangers and nightmare suspense of life lived on the rim of a political volcano.
©1977, 1978, 1981 Robert Stone (P)2008 BBC Audiobooks America

In the Eighties and Nineties, Robert Stone regularly got into the New York Times Best Books of the Year, including Dog Soldiers, A Flag for Sunrise and Outerbrige Reach and although it has been a while since a Stone's book has generated more buzz, his acclaim in those decades as one of the major American writers of his generations is greatly deserved.
A Flag for Sunrise is a triumphant achievement, the Great Central American novel by an American writer, but even calling it that is not doing justice to this dark, riveting work. A Flag for Sunrise is a novel about the shadier, duplicitous nature of modern warfare, and it could well take place in Iraq, Afghanistan, Sudan or Chechnya.
Stone juggles a dozen of desperate and driven character who are caught in the conflict between idealism and realpolitik: a former CIA agent turned scholar who might or might not be still a spy, an idealistic young nun trying to find meaning in a dangerous quest for social justice, a nearly psychotic Coast Guard deserter entangled in arms smuggling and an assortment of dangerous, double crossing and desperate characters, a half mad alcoholic Canadian Priest trying to finish his magnum opus on the meaning of the universe, and a revolution brewing in one of Central America's hot spots at the height of the Cold War. All of this is brilliantly read by Stephen Lang, in an extraordinary performance.
Stone is clearly a master storyteller, with a suspenseful twist at every turn, penetrating character portraits and prose which conveys this hot, dangerous world with bracing, savage beauty.
A major American novel.