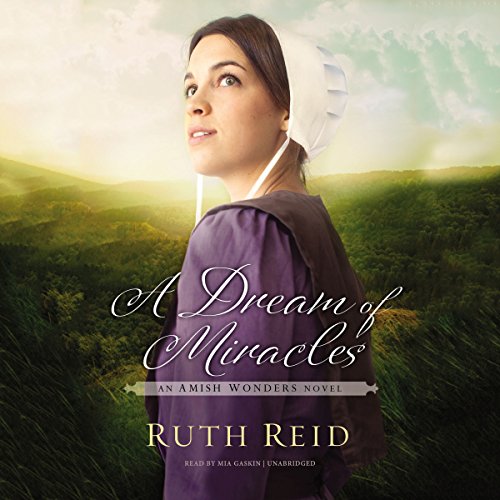 A Dream of Miracles

Amish widow Mattie vows never to love again - until a suspicious outsider with a shadowy past comes crashing into her fragile world.

Mattie Diener can barely keep it together. A young Amish widow and mother of two young children, she faces the lingering heartbreak of lost love, her son's mysterious illness, and a torrent of accusations that threaten to undo her.

Bo Lambright is a fast-rising social-services investigator whose high-society mother won't rest until she finds his Mrs. Right. Despite Bo's worldly success, the raw ache of a shadowy past and a series of unsettling dreams have left him reeling.

When Mattie and Bo cross paths, all signs point to disaster. Yet as they face a crucible of trials and tragedies together, longings begin to stir that seem destined only to end in more heartbreak. Is a miracle possible - not only of healing but of forbidden love? What secrets lie in Bo's dreams? And will Mattie find the courage to face her uncertain future - or will she simply run away?

What a wonderful novel! The storyline was beautifully executed I loved everything about it. I highly recommend it.

One of the best Amish books I've ever read.

One of the best Amish books I've ever read. Very unique and heartbreaking but with a happy ending

Best Amish Book I have Read

I have read and listened to a very large number of Amish books and this one is by far the best or close to it. I love how this series was so different than all the other ones. I love how it has a story line that has never been used and the author did a fantastic job portraying this. The narrator did a wonderful job telling it. I would give it so many more stars if I could!

this was a hard book for this mom

loved the book! I almost stopped reading because of the hard story line but was worth finishing. As a momma losing your kids because of false accusations and feeling helpless is something I know, so it was tough one. Great storyline and research!

OH I JUST LOVED THIS STORY!!!

This story held my attention from the very beginning. It was wonderful! I can’t say enough good things about this lovely tale that will stay with me always. I would gladly read this again. A true testament of Love, devotion, and the miraculous power of God to intervene in situations and relationships. He always has a plan! Praises for this author and narrator. Great job!

I really did enjoy this Amish storyline as it was quiet different than the many Amish books I’ve read to date. But all the Foster Care/court stuff compounded by the medical problems was so stressful to listen to. I think, personally, there were too many negative events for me to truly enjoy the story. The ending resolved nicely but compared to the turmoil for most of the story it just wasn’t enough to offset the negative tone. Also, I didn’t really like the performance of the main character BO. It was a bit raspy and didn’t seem to fit his character. Most of my complaints about this book are personal preference. It’s well written and I love the heart for God and faith expressed throughout. I would read/listen to more by this author.

I thoroughly enjoyed this story. It was engaging and I always like a happy ending.

My only criticism is that fever few is not an herb used to control fever. It’s a very effective treatment for migraines. As with many things in language the name has evolved over time. Perhaps a better herb for fever would be white pine bark.

A Dream of Miracles

I loved it so much. I couldn't it down. The narrator is a very talented narrator. I am so glad I chose to listen to it.