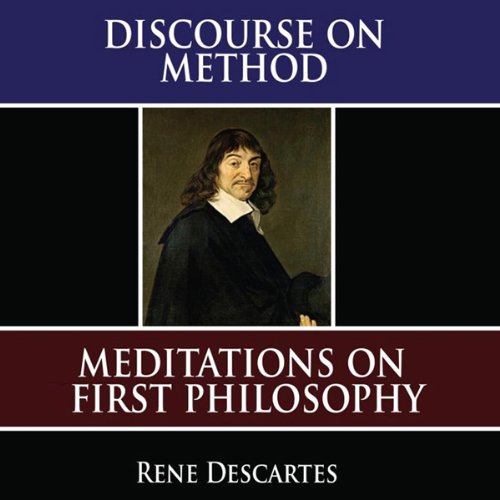 By calling everything into doubt, Descartes laid the foundations of modern philosophy. With the celebrated words "I think therefore I am," his compelling argument swept aside ancient and medieval traditions. He deduced that human beings consist of minds and bodies; that these are totally distinct "substances"; that God exists and that He ensures we can trust the evidence of our senses. Ushering in the "scientific revolution" of Galileo and Newton, his ideas have set the agenda for debate ever since. His philosophical methods and investigation changed the course of Western philosophy and led to or transformed the fields of metaphysics, epistemology, physics and mathematics, political theory and ethics.
Public Domain (P)2009 Blackstone Audio, Inc.

Descartes at his best

Excellently performed. Includes the Discourse on Method, the Meditations on First Philosophy, a Letter to Princess Elizabeth, and the Principles of Philosophy in toto. A great value for three of Descartes most important works. The translation is older, like most of Audible books to keep the price reasonable and is very readable, clear and distinct. Highly recommended!

I will purchase the book. The language is difficult which complicates concentration and comprehension throughout.

A classic, old syntax and all

This is the real deal, Descartes' "I think therefore I am" masterpiece. Be forewarned it contains old fashioned syntax and an even more old fashioned view of the world. If you want to listen to this seminal philosophical work, it's all here.

Great book but hard to "audiobook" it

Even though the narrator does a good job, it can be taxing to listen to. Since I have read the book I was hoping I might be able to grasp the audiobook, but it is still difficult.

a unique philosophy of Descartes. starting point for someone to reflect upon God existence and the world.

Most Beautiful Explication on Philosophy

Well done.
Well authored and beautifully performed.
To think that he thought of the content in the 17th century is amazing.

Great writer, and shows why philosophy is fun

Descartes is a good writer, surprisingly good. This compilation of his most important philosophical works gives a nice redundancy to his body of work and most of Descartes' ideas get repeated in such a way that the listener will have no problem understanding most of his major points.

One should never rely on other authors' summaries of a original philosophical works especially when they are from non-philosophical books, because they seem to always highlight the wrong points in order to make their points while ignoring the real worth of the thinker.

There is no doubt that modern philosophy starts with Descartes. The process becomes the focus not the event itself. Our truths are no longing waiting to be discovered with an ontological rationality derived from a set of principals based on the hypothesized order of the universe, but a process awaiting to be invented through a disentangling of the subjective from the objective world. (Human's no longer discover truth they invent it).

There is another really interesting philosophy of science point that is within these readings. It is our understanding that closes the ontological difference between the subject/object, the word/thing, the Noumenal/Phenomenal. His example involved wax and it's shape, but in the interest of expediency I'll just say that gravity is an intuition. It is our understanding that closes the gap because one will never see the gravity. We can only understand it. Descartes gets that point, and that is one of the reasons why he is very important today.

Overall, Descartes is a great thinker and a very good writer. I would recommend Spinoza's Ethics after reading this one. Spinoza respects Descartes but he'll try to refute him by using the same premises. It doesn't matter which one is correct (to me). The most interesting part is how they get at their conclusions. Philosophy is fun and this kind of books show why.

TOO VERBOSE AND PEDANTIC

TOO VERBOSE AND PEDANTIC .. AMAZING HISTORICAL WORK BUT WRITTEN LIKE POOP. . . . .

The unabridged version is a bit difficult to follow ! The sentences are very long and the narrative is complex .