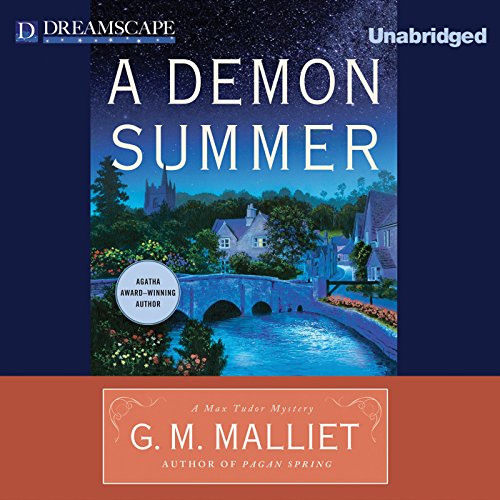 Someone has been trying to poison the 15th Earl of Lislelivet. Since Lord Lislelivet has a gift for making enemies, no one - particularly his wife - finds this too surprising. What is surprising is that the poison was discovered in a fruitcake made and sold by the Handmaids of St. Lucy of Monkbury Abbey.

The powerful Lord complains loudly to the local bishop, who asks Father Max Tudor, vicar of Nether Monkslip and former MI5 agent, to investigate. Just as Max comes to believe the poisoning was accidental, a body is discovered in the cloister well. Can Max Tudor solve the case and restore order in time to attend his own nuptials?

A must read for all cozy enthusiasts--

This superb series has covered all the seasons with this fourth book. It's an awesomely humorous and mysterious book that combines Agatha Christie, Louise Penny and Dan Brown----and Malliet mentions all three authors' works within this book so cleverly too.

Former MI-5 operative Max Tutor, is called upon by his Bishop to travel to Monksbury Abby to check on some unusually financial issues with the records from the Handmaids of St Lucy nunnery. Max also finds himself investigating a suspicious fruitcake poisoning, while he's there.

This mystery, though serious, is sparked throughout by such intellectual humor and brilliant connections to those other famous authors, it is unlike any other cozy series I've read recently. There are chapter heads that tell the rules of these Handmaids St Lucy, along with history of this lady. There is a clash between worldly ways and silent contemplation that adds much to the mystery. I would consider this a must read for any enthusiastic cozy readers!! I listened to a fabulous Audible version of this book which made something great into something extraordinary!!

The first three books of this series were light weight but fun. This book takes a weird turn, as Max Tudor reveals himself to be a judgemental, hypocritical jerk who, oddly for an Anglican priest, doubts that any Anglican nun actually has a religious vocation as opposed to a neurotic desire to flee from the wide world. Max has a pregnant girlfriend who will not marry him in a church, and he hasn't mentioned this circumstance to his boss, the bishop, yet he is outraged that the convent has kept secret their discovery of a valuable icon. It is all very inconsistent and calls his character into serious question.
I will not bother with another of these books.

If the friend had read the earlier three in the series, I might give a cautionary warning. It is simply not as good as the three earlier books.

If you’ve listened to books by G.M. Malliet before, how does this one compare?

The least enjoyable of the earlier three books.

I thought his reading was good, but sometimes his various accents and shrieks were just too much.

I am visually impaired. I do not go to movies.

I was so looking forward to the next in the series. Perhaps the next one will restore my adoration. I love the main characters, but the monastery and the nuns and guests were basically one big bore. One-dimensional characters. Get Max back to the village!

Oh, I REALLY love this series!

I think this is my favorite in the Max Tudor series so far. In this book, Father Max Tudor (a former MI-5 agent and now a priest) has had to leave his village and his pregnant love to go to a nunnery where suspicious events have occurred. He is there to look into the poisoning of Lord Lislelivet, who ate fruitcake laced with something that seemed intended to warn him away.

I thought that beginning (of being poisoned with fruitcake) was either meant to be taken a bit lightly or else it was somewhat awkwardly worked out. But it served its purpose--to get Ftr Tudor to the place where all the mysteries are happening. And unfortunately, things will get worse before they get better.

Let me tell you why I love this series & especially this book. GM Malliet has put this into a convent setting--something that I think it could be challenging to keep interesting for some authors. But Malliet writes with a refreshing dose of modern day observations and comments that are delightfully sprinkled throughout, which contrast with this religious setting where time has all but stood still. She moves deftly back and forth between drawing the listener/reader into the depths of a lifestyle that it is even hard to imagine in this busy world, with comments that remind one that it is indeed taking place in the 21st century.

She has done something else that I think is difficult--she has created a fairly large group of characters, and that can be hard to keep up with in some books. But in this one--the cast of characters are read out in the very beginning--so that was a big help, plus they are so well drawn, that I felt no problem following them.

I think the ending was a little bit too much drawn out--but it turned out to be a complicated situation, and probably needed all the time spent on winding it up. I hope, now that the "seasons" are all used up (in the titles of this series) that Ms. Malliet will still write about Max Tudor. I find this a really enjoyable series, and loved every word of this book. I felt so sorry when it had to finally be over.

It's not unusual for the sleuth to "reveal all" in a final chapter, but this time GMM withholds almost all the pertinent info -- there's no way readers / listeners could have figured out this plot. Worse, Max couldn't have either without a convenient deathbed confession from one of the parties. Lengthy exposition at end not satisfying.

Police Procedural more than a Who Done It

I wish it had not reveled the criminal so soon, and given the reader a chance to try to figure it out based on clues

Would you recommend A Demon Summer to your friends? Why or why not?

It depends. If they like classic mysteries, then no.

Did A Demon Summer inspire you to do anything?

As usual, Max Tudor mysteries are fun and engaging. However, this one had an entirely too long winded finish with Max explaining at length the ins and outs of a too drawn out crime. In fact, the length of the Poirot style unveiling of the truth actually diminished Max’s likability - which was sad. And the hand fasting ceremony was a bit far fetched for an Anglican priest, even one so lukewarm (though amiable and kind) in his beliefs.

I kept listening, waiting for the story to grab my interest, but it never really did. The whole time Max was wandering around the abbey I was wishing he was back in his own village with its more colorful inhabitants. The solution to the crime was of the, "pull a rabbit out of a hat" variety and so convoluted it was hard to follow. Or maybe I just didn't care about any of the characters enough to bother paying attention

Fr Max Tudor unravels the mystery of the human heart

Each Malliet mystery is more tangled touching and terrifying than its predecessor! Fr. Max grows more compelling and more convincing as a priest and a detective. And the cast of characters manages to be both quirky and believable. I thoroughly enjoy this mystery series.

Would you listen to A Demon Summer again? Why?

Probably not. The plot was lacking.

I really enjoy the humor of this series, but this one was problematic. Father Max moons over Awena whenever they are separated. At least in this one he has reason because she is close to giving birth, but he is still nearby (albeit without cel or wi-fi). The denouement is just too convoluted to be tolerated. It is dragged out and really rather silly, with all these suspects just happening to converge on this out of the way Abbey. 3.5

Too sloppy to be convincing

Would you try another book written by G.M. Malliet or narrated by Michael Page?

I have listened to all the Max Tudor series, and while it began promisingly, this book is a disappointment. Obviously these are stories set in the classic legendary village in Nevernevershire; but there are some basic conventions that need to be respected to allow the 'suspension of disbelieve' that makes fiction enjoyable. Unfortunately in this book the rampant Americanisms are really distracting: no aged English nun is going to use the word 'scads', and most English people will remember the Famous Five rather than the Hardy Boys or Nancy Drew. The character of Max Tudor too has become thinner and flatter and far less interesting, despite the attempts to introduce excitement by the improbable device of an Anglican priest concealing from his bishop the fact that he is going to have a pagan wedding with the local white witch.
Stock characters, sloppy writing, a plot so improbable as to be uninteresting----I was quite sad, this book marked a definite step down.

I will go back to some of the classic mysteries that are being recorded---I've enjoyed listening to books by some of the early authors whom I didn't know.

Have you listened to any of Michael Page’s other performances? How does this one compare?

No; but while he reads with good pace, he has trouble with women's voices, which always sound whiney.

Was A Demon Summer worth the listening time?

I probably won't bother with any more Max Tudor books.

And by the way, this format for reviewing books is really awful. It means there is often no opportunity to say what one would really like to say about a particular book!

Cozy in the extreme!

The increased number of anachronistic Aamericanisms in this, the fourth, in the series is beginning to jar, however.

Love This Series - But

I really love the Max Tudor series. fabulous characters, wonderful setting, humour, intrigue it has it all however this was my least favourite so far. I didn’t like the setting in the St Lucy of Monkbury Abbey it felt claustrophobic and the dialogue rushed and choppy. I didn’t warn to the characters in this one except of course the reoccurring ones which I love. Don’t be put off however start with the first book and continue on its worth it.

Investigation at its best

ive recently ventured to go for modern writers of the crime mystery scene. and this one is fantastic , id like to meet a vicar like Max Tudor, makes me think of moving to village life :)