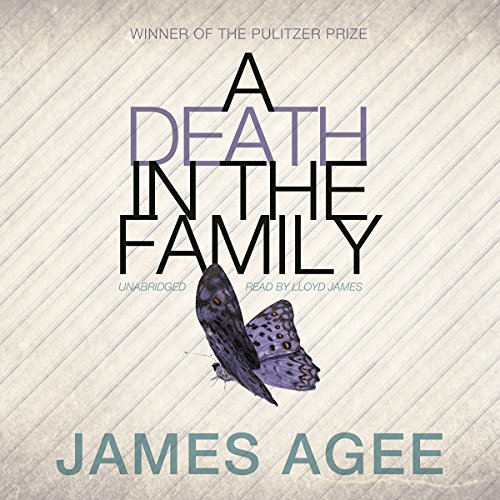 Decades after its original publication, James Agee’s last novel seems, more than ever, an American classic. For in his lyrical, sorrowful account of a man’s death and its impact on his family, Agee painstakingly created a small world of domestic happiness and then showed how quickly and casually it could be destroyed.

On a sultry summer night in 1915, Jay Follet leaves his house in Knoxville, Tennessee, to tend to his father, whom he believes is dying. The summons turns out to be a false alarm, but on his way back to his family, Jay has a car accident and is killed instantly. Dancing back and forth in time and braiding the viewpoints of Jay’s wife, brother, and young son, Rufus, Agee creates an overwhelmingly powerful novel of innocence, tenderness, and loss that should be read aloud for the sheer music of its prose.

Cosa pensano gli ascoltatori di A Death in the Family

It just has to be lived through...

"A rocking chair betrayed reiterate strain, as of a defective lung; like a single note from a stupendous jews-harp, the chain of a porch swing twanged." - James Agee, A Death in the Family Emotionally, this unfinished autobiographical novel felt a bit like David Foster Wallace's last, unfinished novel The Pale King. But it also felt a bit like Bradbury's Dandelion Wine. It was beautiful and sad. It had no answers. Not about religion. Not about God. Not about family. It made me cry, retreading my own experiences with losing my brother a decade ago. It is strange too, to realize you are the same age the author is (45) when the author died. Mortality is a bitch. Some of the greatness of the book is due, IMHO, to its unfinished nature. It becomes a bit impressionistic, painted with scenes and emotions that are a bit disjointed in time and space. There is also an almost rightness that such a great (and it is great) novel, like it's author, was silenced early. The novel and the author's book AND the author's life all become soft fugues of each other. So, I can point to this book as something that resonates with me because of the shared humanity of loss and endurance and family, but it is just simply beautiful. Yes. I'm not sure if it ultimately matters that we know that Mahler's 5th is about death, or whether it is beautiful independent of that knowledge. I'm just not sure. Can we really appreciate life without that shadow of that sword that haunts all of us being and intrigral part of the fabric of our stories, our art, our belief, our families, and our lives?

It too long to establish the plot and the repetitious detail failed to add to the development of the story. The ending was extremely weak and disappointing and failed to tie up the meaning of whatever message the author was trying to convey.

Best book I have ever read

This is a work of art that reveals human strengths and weaknesses in equal measure with a faithfulness that is both honest and understanding. I first read this book as a teenager and have re-read it as an adult. It has always been my favorite book. Agee's lyrical descriptions and combination of realism and empathy while writing from the point of view of various characters are unsurpassed in anything else I have ever read. As he puts a magnifying glass on an average family's reaction to a sudden death, he deftly illuminates its struggles with religion, alcoholism, parent/child relationships (both young children and their parents and adults and their parents), sibling relationships, and one family member who is nearly deaf by employing compassionate outer and inner dialogues throughout the book. He brings the reader into the time and place of the book both as an observer and as a player of one of the roles in this poignant and quintessentially American story. It is beautifully presented here in audio format.

Listening to the delicate way Agee describes the deepest feeling and emotions of human kind through simple and preside descriptions for different points of view is eye opening. I throughly enjoyed it

I had never heard of this author or this book- so glad I stumbled upon it! Moving, thoughtful- a great story told by a fantastic narrator

CW: family death, racist language This poignant story follows the experiences of one family, the Folletts, just before the death of the father, Jay, through just after the funeral is completed. It centers on the experience of Jay’s young son, Rufus, although Jay’s wife, Mary, and brother-in-law Andrew are also major characters, along with (to a lesser degree) Jay’s daughter, Catherine, younger than Rufus. It is told with Agee’s characteristic pathos and beautiful, ecstatic prose. Agee died suddenly before this book was published, making his Pulitzer Prize win for it a posthumous one; however, that by no means indicates that the story is not substantially complete. Agee’s work, even if it may not have looked exactly as he had envisioned it had he lived, is a stunning, heartbreaking account that has its funny moments, too. This book is well-worth a read.

I am continuing my personal goal of reading all of the Pulitzer winners, and this gem makes me so glad that I started. This book is brutally, devastatingly sad. But is is also the best exploration of death that I have ever read. (And, this may be one of my favorite themes in literature as it exposes so much about humanity and the emotions we all feel at some time in our lives.) There is no spoiler here as the title of A Death in the Family tells us exactly what we are going to experience. However it was a surprise that we were a third of the way into the book before that death happened. And I am so glad that was the case, because that allowed me to care about and connect with all of those who would be left behind to mourn the loss. The entire narrative occurs over a few days, which allowed Agee to delve deeply into all the little moments. When the spouse is considering the "what ifs" before she knows the outcome of the accident, she moves from denial, to hope, to fear, to acceptance. (1. Perhaps he has the wrong person. 2. Well, if it is my husband he may need to be in bed for a while so I will make up the room downstairs. 3. I hope it isn't so bad that he is mentally deficient in the future. 4. He must be gone or I would know by now, wouldn''t I?) It is brilliant, true, and so very real. It is exactly the way we all experience an unexpected loss. This is a spare, simple, quiet book without a traditional plot. This one is all about character and emotion. The events are mundane and uncomplicated. The describtions are about the tiniest details. But the emotional impact is profound. The children in the story are written with authenticity. Rufus believes that he must be the caretaker of his sister. And while the other children at school are cruel towards him he takes a sliver of pleasure from his new prestige and status. He is getting attention that he never had before. And Catherine is unable to comprehend that her father is not going to come home. They argue with one another in the ways that two siblings trapped at home do. Their confusion, sadness and irritation is palpable. But they are never portrayed as too mature or too immature. Agee created children that act like children. I will recommend this one often, but perhaps only to those who have put some space between them and the events that caused them similar pain.

….long overdue for me. I'm so grateful to have read this work on the recommendation of a close friend. I will definitely read it again in the future I'm sure. Mr. Agee's writing, I feel has a way of placing me "in the story" from the very beginning. I'm not at all surprised to know that this work won the Pulitzer. I will purchase the hard copy to keep in my collection of treasures. Kip

I delayed listenting because I didn't want to get depressed. It is really a great book, and is now one of my favorite. It didn't depress me! James Agee has a brilliant style of writing.