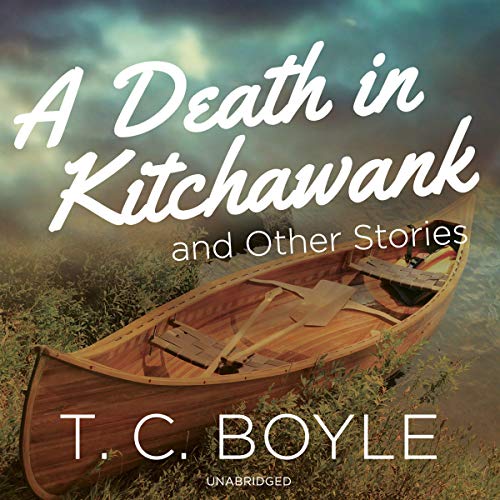 A Death in Kitchawank, and Other Stories

Few authors write with such sheer love of story and language as T. C. Boyle, and that is nowhere more evident than in his inventive, wickedly funny, and always entertaining short stories. Here are 14 new tales previously unpublished in book form.

By turns mythic and realistic, farcical and tragic, ironic and moving, Boyle's stories have mapped a wide range of human emotions. The stories here reflect his maturing themes. They find Boyle engagingly testing his characters' emotional and physical endurance, whether it's a group of giants being bred as weapons of war in a fictional Latin American country, a Russian woman who ignores dire warnings in returning to her radiation-contaminated home, a hermetic writer who gets more than a break in his routine when he travels to receive a minor award, or a man in a California mountain town who goes a little too far in his concern for a widow.

Cosa pensano gli ascoltatori di A Death in Kitchawank, and Other Stories

Many years ago I read a class assigned short story by T C Boyle called “Greasy Lake.” I did not like the story because I got hung up on one word he used incorrectly—in describing a character’s losing his car keys as a “tactical error” when a tactic is a deliberate planned maneuver not something that occurs by accident. I decided to henceforth avoid anything written by Boyle, which, of course, is just stupid on my part. Now, decades later, I came upon his “Tortilla Curtain” and it is excellent. Even more, he reads it himself, which normally for me is the kiss of death when it comes to recorded versions of books—most of the time authors are terrible readers of their own works. “Tortilla Curtain” would make an excellent Netflix series and I intend to write to Netflix suggesting it. It’s theme of Mexican immigrant vs American citizenry is au courant and his handling of the issues involved is very even-handed and empathetic all around. So, that novel prompted me to add “A Death in Kitchawank, and other Stories” as part of my Audible Library (all of those stories also read by Boyle).

Overall, these stories failed to win me over because most of them are unresolved. Boyle does a great job bringing characters to life, and even though some of these stories are a bit dated, the ways modern Baby Boomers think and the issues they contend with as they gradually then oh-so-rapidly age are very relatable. I detect a style Boyle embraces with his characters—he gives you insight into their thoughts and the characters are frequently second-guessing themselves, reconsidering their first reactions, deciding that first impressions were false, always on edge with their decision making—kind of like real humans. That type of inner monologue reveals our insecurities and it does seem nearly every one of his characters in these short stories and the characters in The Torilla Cutain also suffer from abject insecurities 24/7. The style works for Boyle’s and his own actual voice reading his works in adding authenticity to that type of nervous being. (Boyle’s voice is so reminiscent of an actor or other reader’s voice, that it makes me crazy. I can almost see the other person, yet, I can’t. The vocal twin remains illusory for now).

When it comes to this short story collection, I was left disappointed again and again, story after story, in the lack of resolution to a character’s dilemma, storyline, plot twists which after Boyle does a great job hooking the reader, setting up the situation, presenting the narrative, boom, the story ends with so many loose ends and ultimately the reader is left dangling on each and every one of them. It’s like Boyle himself says, “listen guys, let me tell you about this guy I know and this stuff that happened to him....”. Then, then he gets up and goes home, And you go, “well, what happen?” And Boyle says, “hey you figure it out.” It feels like a deal has been broken between author and reader.

The other aspect of these stories is the impression I got that so many of them were sketches for novels that he just didn’t know how to resolve into a full blown book. So many of these people, I wanted to know more about.

Nobody does it better.

TC Boyle reading his own stories is simply nirvana. Usually I don't care for writers narrating their own work, but Boyle reads the way he writes---like a house on fire.

As a huge fan of Boyle, I was disappointed with this collection of short stories -- kind of aimless meandering with lots of detail thrown in.

may have descriptions of animal cruelty

I had to stop when a story began to be about domesticated animals and pets being used as bait. Bait for exactly what I didn't find out. My first thought was how dog fighters obtain live targets for making their dogs more vicious snd I want no more pictures in my head than I already have. The stories before that one were interesting enough, and I did enjoy the authors style. People should be aware of what can happen when they give away free puppies, kittens, rabbits, and even older pets. The people who fight dogs are good at lying and making like they will provide good caring homes. If I am wrong about where the story was going I am sorry and I apologize.

I read TC Boyle in a college course and was excited about this book. When each story ended it left me wanting more, which I guess is a good thing but also frustrating. He’s a great narrator & storyteller but I want to know the endings! lol

I have to say that I start each new Boyle short story with trepidation. There are a few that I wish I’d never heard not because they are badly written but that events are included that leave me feeling hollow or even nauseated. Yet, at his best, he can touch one’s heart and go surprising places that are very heart-rendering.

Like all of T.C. Boyle, very detailed and engrossing imagery but I have to admit this work didn’t hold my interest. I just didn’t much care about what he was writing. Sorry, but still a fan.

I liked these stories. I listen to audio books to relax before bed, and this book/stories were entertaining. The reader was easy to listen to.

The Man! TC Boyle. Like Hemingway. As good really. The creative plots, the interesting characters, the details spotless. Not a wasted word. Usually I don’t like short stories on audio as it takes me a while to get characters and details straight. But TC is so clear. Listen to this and everything else he’s done.

This guy must have got A++ in every creative writing course he ever took - he never puts a word wrong. Stories are lean and action-packed and almost always have a point. So why only three stars? Honestly, it is just because I am a middle aged woman, possibly with a pedantic bent, and he is not floating my boat. I feel Boyle is writing for guys (there is quite a bit of violence and pain, and his female characters all cook much better than I do). Don't let me put you off if you like well written short stories set in the USA.

perfect short stories that stay with you. Like a blend of John Updike couples and David Sedaris' excruciating honesty, sure footed and spare, each story unfolds so naturally that you forget it has been written.
From dog baiting lowlife to menopausal housewives, each character feels unique and true; funny, thoughtful and original.

The author reading their own often doesn’t work, actors
narrators seeming to add more depth etc. This audible
Has proved me wrong, he is very capable of reading his
own, and is very good at it, love the format, really like his droll and sometimes quite subtle tones, really worth
downloading , try it !