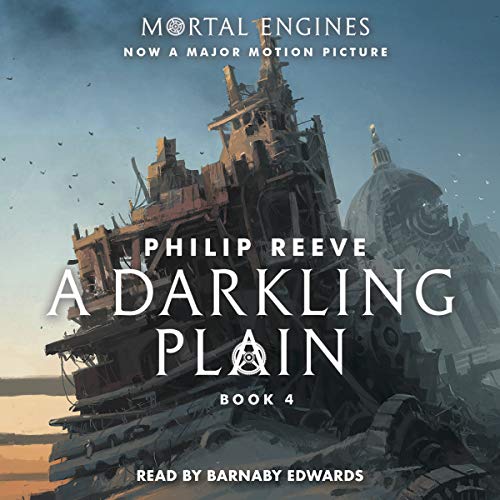 The final book of the thrilling Predator Cities series!

London is a radioactive ruin.

But Tom and Wren discover that the old predator city hides an awesome secret that could bring an end to the war. But as they risk their lives in its dark underbelly, time is running out. Alone and far away, Hester faces a fanatical enemy who possesses the weapons and the will to destroy the entire human race.

The final book in the Predator Cities series, Philip Reeve's A Darkling Plain is the winner of the Guardian Children's Fiction Prize.

I enjoyed all 4 books in this series (sometimes called Mortal Engines; sometimes called Hungry City Chronicles) equally. Barnaby Edwards's performance is nuanced and skilled; you can tell right away who's talking and can get to know the characters better based on how he brings them to life. I'm very excited for the movie of book 1 (Mortal Engines), which comes out later this year. Great sci-fi series, highly recommended.

I liked this series before but now I love it

I got into the series because of the trailers for the movie. I liked the first book more than the movie. I love this series now if only because of the conclusion this book gave it. While the premise is fairly outlandish the characters bring it to life. I would whole heatedly recommend this to almost anyone.

By the time you’ve gotten to this fourth book you are already committed to the story so I will spare everyone commentary there. What I will say is that it is exceedingly rare for Sci-fi/fantasy stories to tie up all loose ends and craft such a neat and clean “full circle” which brings the reader back to the beginning and with such a sense of satisfaction.

The longest and arguably the most epic of the four Mortal Instruments books, A Darkling Plain (a title that still kind of confuses me) is the grand, climactic adventure that you want it to be. I appreciate the sort of bold creative choices Philip Reeve makes throughout the entire series, and he certainly makes more here. I have to admit, I found myself not entirely onboard with some of his choices for the end. It certainly didn’t ruin the book or the series for me, and in some ways, perhaps felt more real considering the flawed heroes at this story’s core. However, in the end, I think I preferred some of the earlier books a bit more. That’s certainly no reason you shouldn’t finish the series, though, and there are plenty of moments in this final installment that rank among the best in the series.

now this is story telling at its finest. the narrator was wonderful to listen to.

A great conclusion to the Mortal Engines series

Many of the loose ends from this narrative are tied up! The books point on the futility of men's actions is interesting!

What a nice clean bowtie ending... sad, yet promising and fitting. I love this series!

I really enjoyed this series. Barnaby did an amazing job of making the characters come to life! I wish the ending had been different but overall this book really tied together the series. It did leave a few openings for branching out with Wren's story; so hopefully there will be more to come.

A fitting end to a great series

Barnaby Edwards does a masterful job of narrating the characters and bringing each scene of this final book in the Mortal Engines series to life.

Arguably the best book in the series, it does a wonderful job of concluding our time in the world of the Mortal Engines.

This was by far one of the best book’s I have read, the story was amazing but the ending was riveting, it brought me to tears, I recommend this book entirely, read all of them as this is an amazing series.

I have just binge listened to this fantastic series of books. I read them years ago but to hear Philip Reeves world and characters brought to life by Barnaby Edwards made me re-read them. The stories throughout the Mortal Engine series really ignite the imagination, they are so solidly thought out. This is definitely one series I would be happy to listen to over and over.

A great end to the story right down to the last paragraph and another great performance by Barnaby Edwards.

wow, what a story. what an ending! (it wants more words for the review but all I can say it wow. it's wonderful)

Best book in the series

This was a fun and exciting story which really puts a nice capstone on the series as a whole. The narrator Barnaby Edwards has a great way of capturing the nature of the characters he portrays, and I think this story serves as a great way to end the narrative. Penniroyal remains the best character.

wow what an amazing finale

Philip reeve has got this stride in this the final book. The ending is magnificent as the beginning. Truly the cycle of life has been told here, I am sure there are references to modern society but who needs those...no need to over think things. brilliant for all ages.

A great end to an amazing story. such depth go characters, great plot and an emotional ending. one of the best series of books ever written, surprised it's not more popular.

I had a wonderful relaxing time listening to a adventure packed story, had trouble stopping at times, enjoyed it immensely.

Now that's a proper end to an avesome story.

Book 2 was a bit underwhelming, but all else was amazing. No stupid "and they lived long after" ending, and sad death of the main characters was interrupted with cheering moments etc. Most importantly- no loose ends left untied at the end, none important enough for me to remember anyway.

A story of cities

Excellent story, very enjoyable to listen. Recommended but first read the books that came before for context.