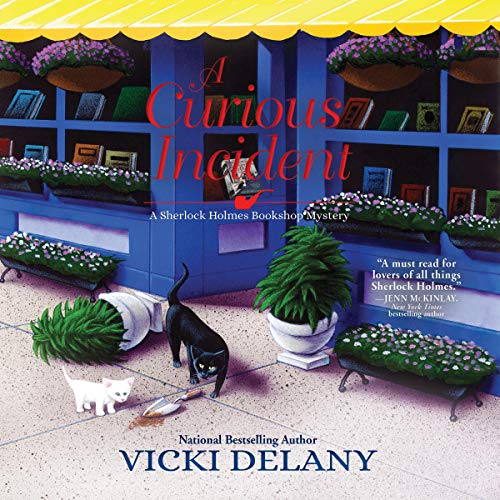 I am not a consulting detective, Gemma Doyle reluctantly tells 10-year-old Lauren Tierney, when the little girl comes to the Sherlock Holmes Bookshop and Emporium to beg Gemma to find her missing cat, Snowball. Gemma might not be able to follow the clues to find the cat, but her dog, Violet, follows her nose to locate the missing kitten in a neighbor's garden shed. Gemma and Violet proudly return Snowball to her grateful owner, and Gemma basks in praise for a job well done. But a few days later, Lauren is back with $10 in hand, wanting to once again hire a consulting detective, and this time for a far bigger job: Her mother has been accused of murdering her garden-club rival.

Sheila Tierney's garden, which everyone said was the one to beat for the West London Garden Club trophy, had been vandalized the night before the club's early summer tour. Sheila confronted her former friend and gardening partner Anna Wentworth in a towering rage, and the women nearly came to blows. Later that night, after having won the trophy for best garden, Anna is found murdered, and Sheila Tierney is the police's prime suspect.

Despite herself and despite the disapproval of her police-detective boyfriend, Ryan Ashburton, the game is once again afoot, and Gemma finds herself and Jayne Wilson using their powers of deduction to ponder yet another curious incident.

this is a story I will listen to again and again. It is a well written story.

I enjoyed the story, it kept my interest all the way to the very end.

Amazing Series, just as good as the others

I have found some serious get repetitive or boring after a while. This does not. This is my favorite series out of the many cozies I have listen to. Gemma is a lovable and annoying character just like the great Sherlock. I like that the references also included true data and current events (BBC Sherlock series). I am sad every time I finish a books as there is not another to listen to!

Vicki Did It Again!

Vicki Delany created the best 2021 masterpiece this year about a husband murdering his own wife! Who knew in the surprising deductions after Gemma hit her head on a rock made her think better and tell Detective Ashburton that the situation flashbacked to Anna’s dog not going to fetch Anna’s husband because he hated dogs! When Gemma’s dog Violet was able to go fetch people to help Gemma from her dangerous fall in the same park! It was amazing that there are two culprits this time! Anna ruined Sheila’s garden with her dog Peony digging in the dirt, and Mike, Anna’s now ex husband, murdered Anna in the park while she walked her dog Peony, and Peony knew with his dog senses who attacked his true owner, which is why he didn’t fetch anyone for help!