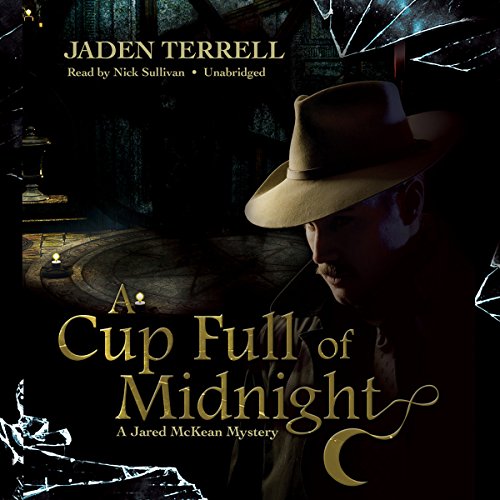 A Cup Full of Midnight

At 36, private detective Jared McKean is coming to terms with his unjust dismissal from the Nashville Murder Squad and an unwanted divorce from a woman he still loves. Jared is a natural horseman and horse rescuer whose son has Down syndrome, whose best friend is dying of AIDS, and whose teenage nephew, Josh, has fallen under the influence of a dangerous fringe of the goth subculture. When the fringe group’s leader—a mind-manipulating sociopath who considers himself a vampire—is found butchered and posed across a pentagram, Josh is the number-one suspect.

Jared will need all his skills as a private investigator and former homicide detective to match wits with the most terrifying killer he has ever seen. When he learns that Josh is next on the killer’s list, Jared will risk his reputation, his family, and his life in a desperate attempt to save the boy he loves like a son.

Jaden Terrell is a member of Mystery Writers of America, Private Eye Writers of America, International Thriller Writers, and the Tennessee Writers Alliance. The former special education teacher is the executive director of the Killer Nashville crime literature conference and a SEMWA Magnolia Award winner. A graduate of the Citizen Police Academy and the FBI/TBI Citizen Academy, Terrell has a red belt in Tae Kwon Do and is certified in equine sports massage therapy.

If you could sum up A Cup Full of Midnight in three words, what would they be?

The story was interesting with some surprising twists. I enjoyed seeing how the main character continued to evolve as a "person."