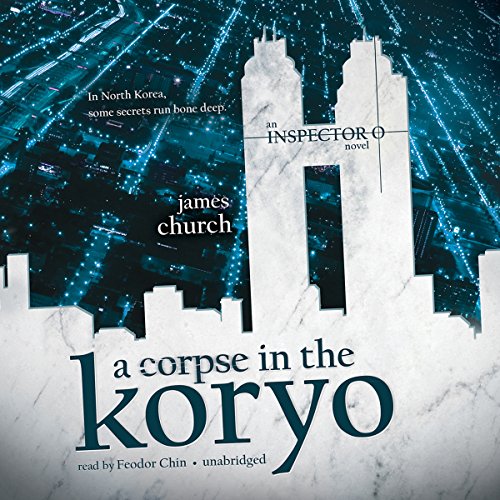 A Corpse in the Koryo

Sit on a quiet hillside at dawn among the wildflowers; take a picture of a car coming up a deserted highway from the south.

Simple orders for Inspector O, until he realizes they have led him far, far off his department’s turf and into a maelstrom of betrayal and death. North Korea’s leaders are desperate to hunt down and eliminate anyone who knows too much about a series of decades-old kidnappings and murders—and Inspector O discovers too late that he has been sent into the chaos. This is a world where nothing works as it should, where the crimes of the past haunt the present, and where even the shadows are real.

Author James Church weaves a story with beautifully spare prose and layered descriptions of a country and a people he knows by heart after decades as an intelligence officer.

Cosa pensano gli ascoltatori di A Corpse in the Koryo

An amazing and ambitious first novel. Think of it as Raymond Chandler gets hardboiled and eaten cold by a North Korean bureaucracy where the good guys don't just battle crime, but have to fight through a broken, Kafkaesque maze of political nihilism, factionalism, and stoic fatalism JUST to get some gas or a cup of tea.

Church's natural details are amazing, his writing is both polished and crisp, and his story is superbly well-crafted (I can imagine the idea for Inspector O slowly evolving and being worked and turned and rolled-over in Church's creative pocket like an odd, but beautiful piece of dark persimmon wood). Not since reading my first Olen Steinhauer have I been this excited to discover a new (for me) genre writer.

Would you try another book from James Church and/or Feodor Chin?

I've read all of James Church's books and will continue to do so and I imagine there are many books that Feodor Chin would be very good at narrating, Jeeves stories come to mind. He has a very optimistic and bright voice, which is great until you start doing the voice of a serious to the point of solemn inspector in a prison of a country surrounded by starving people. Church is a great author and Chin seems like a good narrator, but whoever matched these two up needs to find another line of work.
Sorry, I wouldn't be so upset if I didn't like the Inspector O novels so much. This is the worst matched narration since somebody decided they should do Easy Rawlins with an effeminate voice.

What was one of the most memorable moments of A Corpse in the Koryo?

Hearing the narrators voice for the first time.

Remind him that this is not a feel good buddy story.

If you could play editor, what scene or scenes would you have cut from A Corpse in the Koryo?

I never read or listen to abridgements.

I think these novels are good enough that they should be done over by someone like Frank Muller.

The setting of this book really sounded interesting--North Korea. Then add a mystery, and I was really looking forward to reading this book, but it really disappointed me. It's the first book in a series, and "introduces" Inspector O. But that was one of my big problems. I'm one that always likes to read the first book in a series just so I can get a really good feel for the main character. This book is actually told from the perspective of Insoector O being interrogated about a crime. Unfortunately, that left very little opportunity to get any background on Inspector O. The setting was a different matter. I got a real feel for the mountainous scenery and different buildings of the area.

Someone is found dead in a hotel. But inspector O was sent on a diversion assignment to photograph a specific place at a specific time. Many chapters later, we see that all this was a diversion that Inspector O tried to muddle through on his own ethical terms, but the North Korean government wanted to keep their actual crimes covered up. This was not really developed sufficiently in my mind. I found the back and forth between interrogating and first person narrative a bit confusing also.

Though I found lots of potential to like, I think James Church (a pseudo name for an actual North Korean spy) could have done so much more to introduce this character and develop his mystery. Unsure if I would read more of these book or not, though the North Korean aspect still intrigues me.

I tried, but no story there. I gave up.

I listened for 4 hours, continuing to hope that something would develop in this story, but it just had the interest of a limp pancake.

Slow build up to a great finish!

At first I was concerned that I had jumped into th e middle of the series, but I kept on listening. it was well worth the wait!

Like many others I was impressed by the writing and might give the next book a chance, but this book never really gets going and the ending doesn't explain the goings on.