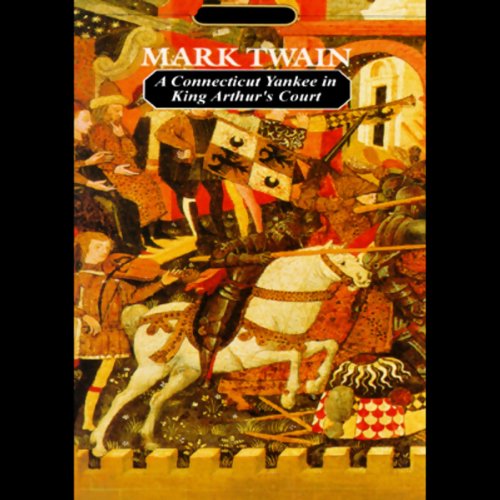 An ingenious Yankee mechanic, knocked unconscious in a fight, awakens to find himself in Camelot in 528 A.D. Imprisoned by Sir Kay the Seneschal and exhibited before the knights of the Round Table, he is condemned to death but saves himself by posing as a Merlin-like magician, correctly predicting an eclipse, and becoming a minister to King Arthur. He increases his power by applying 19th century knowledge of gunpowder, electricity, and industrial methods. However, when he attempts to better the condition of the peasantry, he meets opposition from the church, the knights, Merlin, and the sorceress Morgan le Fay.
(P)1999 Blackstone Audio Inc.

Should have read this sooner!

Who knew Mark Twain covered time travel?! The main character does (or does not?) travel back in time to the Age of Chivalry and King Arthur, with the knowledge of 19th century technology. At points it is laugh-out-loud funny, sometimes tense, sometimes tender. Well worth a listen, and this narrator is terrific (I was a little worried for the first 10 minutes or so, but he really comes alive). This book is quite suitable for teens as well. Every now and then I get around to one of those classics I wish I had read earlier, and this is a definite "shoulda."

I have been an Audible member for several years, listen mostly to the literary classics, and this is the finest reading I have heard on Audible.

The clarity of medievil England coupled with wry humor made this and exceptional listen.

I gave up part way into it.

Everything. I love Stuart.

I just got bored with the story midway into it. I felt as though I could guess everything that would happen, and the writing was much too comfortable for me. I was just bored. However, I believe there is quite a reward by the end of the book for those whose attention it does hold. Just not my cup of tea, even though it really sounded like it would be. One of my favorite narrators however.

I almost always favor audio versions of books, but this one was a dud for me. The narrator's voice is just too grating. I did not even bother to finish listening to it. If I had the opportunity I would have returned it for a credit. I can imagine several other actors who could have done a better job with this. A British actor would have been much better since it is set in England. I would love to hear Hugh Lurie of the House TV series read this book.

Like some jokes that could be funny if they got to the punchline a little faster, this book starts out with a good premise, but seems to ramble and then, gradually, to lose steam and die. It was disappointing when I got to the point that I finally turned it off and gave up -- something I've only done on one or two audiobooks before. If there is an abridged version available, that would make more sense.