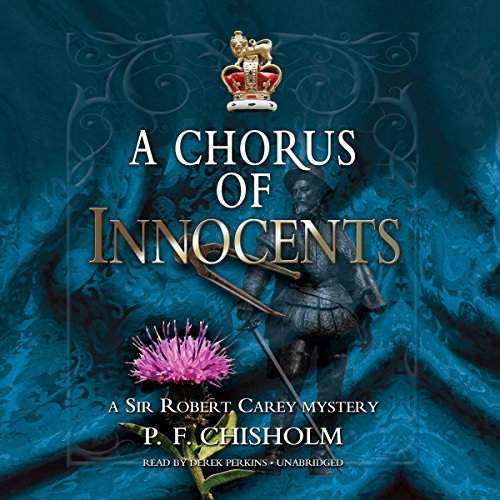 Thursday, October 12, 1592. Eighteen days after the action closes in An Air of Treason, courtier Sir Robert Carey and Carey's surly, larcenous, and loyal henchman, Henry Dodd, land sergeant of Gilsland, are back in Carlisle and the Debateable Lands - the Border country, the wild North, the land of the hot trod, where the thieving, feuding reiver clans are "English when it suited and Scots at their pleasure".

A Chorus of Innocents ushers forward Lady Elizabeth Widdrington, a married woman whom Carey adores but respects. It opens when a very pregnant young woman rides to Lady Widdrington's tower, crying that her minister husband has been murdered and she herself has been raped.

Are more of the Sir Robert Carey books coming to Audible?

It is a great series set in Elizabethan times with great atmosphere and characters.

This mystery is the kind you cannot put down . It is totally absorbing, and it is also funny; full of wonderful historical details and interesting characters. The reader is perfect.

Why aren't there more Sir Robert Carey mysteries on Audible? There are only two!

Derek Perkins has the perfect voice for narrating a story containing a diverse range of characters from both north and south or the border!