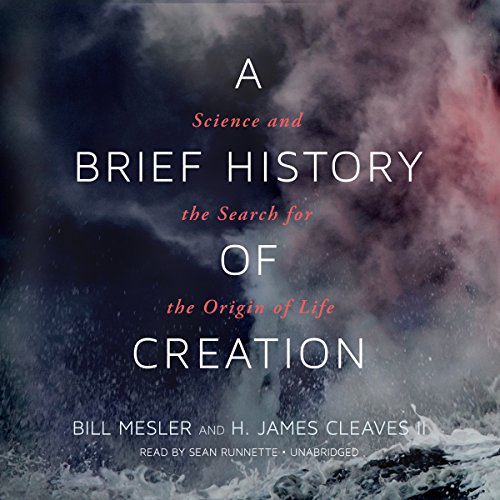 How did life begin? It is perhaps the most important question science has ever asked. Over the centuries, the search for an answer has been entwined with some of science's most revolutionary advances, including van Leeuwenhoek's microscope, Darwin's theory of evolution, and Crick and Watson's unveiling of DNA.

Now, in an age of genetic engineering and space exploration, some scientists believe they are on the verge of creating life from nonliving elements and that our knowledge of the potential for life on other planets is ever expanding. In the midst of these exciting developments, A Brief History of Creation provides an essential and illuminating history of Western science, tracing the trials and triumphs of the iconoclastic scientists who have sought to uncover the mystery of how life first came to be. Authors Bill Mesler and H. James Cleaves II examine historical discoveries in the context of philosophical debates, political change, and our evolving understanding of the complexity of biology. The story they tell is rooted in metaphysical arguments, in a changing understanding of the age of the Earth, and even in the politics of the Cold War. It has involved exploration into the inner recesses of our cells and scientific journeys to the farthest reaches of outer space.

This elegantly written narrative culminates in an analysis of modern models for life's genesis, such as the possibility that some of the earliest life was composed of little more than RNA and that life arose around deep-sea hydrothermal vents or even on other planets, only to be carried to the Earth on meteorites. Can we ever conclusively prove how life began? A Brief History of Creation is a fascinating exploration not only of the origin-of-life question but of the very nature of scientific objectivity and the process of scientific discovery.

5 stars for the history, 2 stars for current theor

I am conflicted about this book. I was ready to give it 4 or 5 stars all the way until the last chapter. I was positive the authors would do a better job of explaining how life might have arisen at the hydrothermal vents.

Let me start with what was good about this book and then move onto some things I felt should have been addressed before publishing:

This book provides a history of science that is entirely focused on origin of life research. Since that is in the top two of my favorite things to read about, I was extremely excited about this book and remained so for the majority of the chapters. Focusing on origin of life studies allowed me to see various scientists in a different light. Their origin of life studies are usually a side story instead of the main event. But, in this book, the authors begin at ancient times and move forward, highlighting each person who became obsessed with explaining the origins of life. It was an extremely satisfying history. The authors were really on hard of Voltaire. His book Candide is my number one favorite book of all time. It was almost crushing to me to see Voltaire portrayed in such a poor light. However, I really understood where the authors were coming from and I delighted in learning new information about all the feuds that took place as various scientists battled it out to see whose hypothesis would be the one to explain where all life originated.

What I did not like about this book was that the authors sandwiched our best possible theory about the origin of life, the vent hypothesis, in between history (including primordial soup) and the RNA World.

They failed to explain why the RNA World and other hypotheses fail. There was not one mention of thermodynamics at the vents and very little focus on the natural acidic conditions which are capable of sending hydrogen through the rocky membrane to assemble amino acids, fatty acids, and DNA. There was no discussion of evolving channels capable of pumping Na+ so the cells could break free from the vents and populate the oceans. If you are looking for a proper explanation of Nick Lane, Mike Russle, and Bill Martin's work, this book is the wrong book for you. The authors don't seem to understand the hypothesis very well. In addition, when covering the RNA world, they never discussed how the theory needs to account for the energy needed to replicate. They tried to *sort of* mention it, but wow, they really messed up there. If a theory doesn't jive with the second law of thermodynamics, and if you cannot account for where the replication energy came from, then the theory is bad. Period. The authors only suggested the RNA World might explain origins of life. I am not suggesting they were sold on the idea. What I am suggesting is that they did not do nearly enough homework on the more current theories to have written a book about them.

I cannot help but wonder how many stars Nick Lane would give this book.

For a better primer on the hydrothermal vent and RNA World hypotheses, you should read Adam Rutherford's Creation. It was exceptional and really makes Nick Lane's work easy to understand.

This book walks through how science has and is evolving. Describing with real life stories of how sometimes one step forward, followed by two steps back led to a better understanding life.

One of my favorites.

A journey through history

Fascinating information and history of creation. This book was an excellent read for those who have an interest in the creation of life.

I would have paid for this book

Great story of the science/ philosophy of creation. Fast and interesting journey thru the centuries.

This book is a perfectly, well illustrated travel on time, that takes place in the world of the unknown. Marvellously written!

Loved the history and stories.

Authors seem to ignore the fact that atheist scientists operate out of a believe system based on faith.