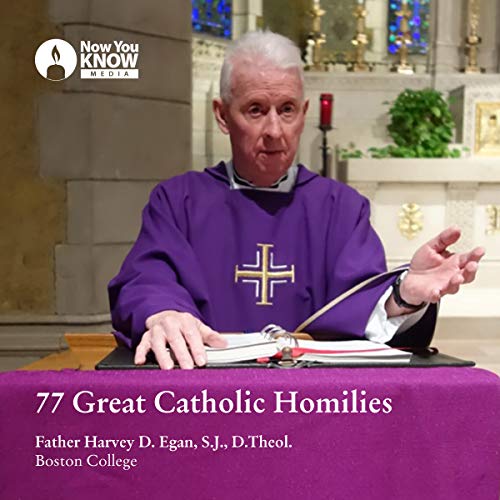 You will find anecdotal wisdom in spades. Fr. Egan’s homilies approach topics in Christianity from a simultaneously creative and orthodox perspective, eschewing the tendency for homilies to become treatises on scriptural passages or mere platforms for political views. Instead, Fr. Egan strives to balance fidelity to the mass with attentiveness to his listeners’ interests.

Drawing on his decades of pastoral experience and St. Ignatius of Loyola’s example, Fr. Egan offers you a glimpse into his process. When he sits down to prepare a homily, he begins by reading over the commentaries of some of his favorite scripture scholars. “Almost always,” says Fr. Egan, “they give me a few ideas, a jumping off point.” In each powerful homily, you will find spiritually edifying nuggets of insight.

In the end, the tone of the series might be best illustrated by one of the many amusing anecdotes you will hear from Fr. Egan. He recalls a friend once saying that homilies were like good home-cooked meals: Years later you might not remember what was actually cooked, but no doubt you were nourished. 77 Great Catholic Homilies follows from this analogy, hoping to nourish you spiritually.

I really had high hopes for this. But the first and second homilies were almost identical. Both included the line that he "surfed with dolphins and danced with an orangutan". And no, I'm not making this up. His use of "humor" is cringe worthy. I stopped about one hour into this.

Thank you, Fr Harvey D. Egan and God bless you!

I really enjoyed these 77 Homelitics, Fr Harvey D. Egan your delivery and teaching are influential. May the atheist and doubters turn and become into believers. One, Holy Catholic and Apostolic Church, Amen!