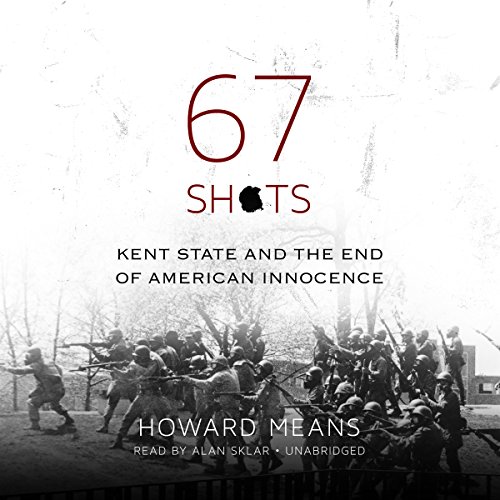 At midday on May 4, 1970, after three days of protests, several thousand students and the Ohio National Guard faced off at opposite ends of the grassy campus commons at Kent State University. At noon, the Guard moved out. Twenty-four minutes later, Guardsmen launched a 13-second, 67-shot barrage that left four students dead and nine wounded, one paralyzed for life. The story doesn't end there, though. A horror of far greater proportions was narrowly averted minutes later when the Guard and students reassembled on the commons.

The Kent State shootings were both unavoidable and preventable: unavoidable in that all the discordant forces of a turbulent decade flowed together on May 4, 1970, on one Ohio campus; preventable in that every party to the tragedy made the wrong choices at the wrong time in the wrong place.

Using the university's recently available oral-history collection supplemented by extensive new interviewing, Means tells the story of this iconic American moment through the eyes and memories of those who were there, and skillfully situates it in the context of a tumultuous era.

A trove of surprisingly fresh information.

For those around the country who lived through the Kent State tragedy, much of the first half of this book may not be news. The reporting and analysis of events from the moment the last trigger was pulled, on the other hand, may well be a revelation. This is one of those rare achievements that get better with every page. My hat is off to the author.

One of the best Audible books yet. It brought a lot of new (to me at least) information to the topic of the Kent State Massacre. Well rounded to include interviews with and thoughts of students, townspeople, guardsmen, faculty, political leaders and more. Outstanding narration held my attention throughout. If you have any interest at all in this topic, give this one a try.

I thoroughly enjoyed this book from beginning to end. Not only does it provide an in-depth look at the tragedy at Kent State, it does so in the context of the times in which it occurred. It is well researched and the ending provides a very good analysis of the event as well as The many repercussions.

This is THE book of the Kent State shootings and it is very well read by Alan Sklar. Howard Means has my deepest respect for his in-depth research of all documents, eyewitness accounts, photographs, and records, right down to the basketball game on TV at the college bars during riots. Each little detail provided a lasting image of the events leading up to the event and the aftermath. I was fascinated to learn of the grammatical error in the president’s sympathy letters, for example. I grew up in Akron/Canton area after the incident and I’d describe my knowledge of the events more of a “History Channel” version. I mean to say a flashy account condensed into a segment meant to capture a limited attention span. However, this book made me realize how little I knew and I feel that I have come away with a much richer and deeper understanding from multiple perspectives. One part that nearly made me cry was the response of the public to the death of the students and the seething misinformation spread immediately after the incident. Also, I had no idea what weapons were used beforehand and I have been on Kent campus and it is not a remote and expansive shooting range, it is a moderate-size campus with buildings snuggly spaced throughout. I cannot even imagine how it would feel to see a 30-06 bullet going into the wall while you stand in the dorm room hallway waiting for an elevator. I could go on and on in this review. One last thing that struck me was the clear inconsistency in the guardsmen’s accounts that is definitely not corroborated in any of the photographs. I cannot begin to think how social media and smart phones would have impacted the aftermath. It’s amazing that a few photos were snapped showing the students at a distance from the guardsmen and that at least one student in a dorm window thought to audio record the incident. I just cannot stop thinking about Allison Krause. Whew, I’m so thankful that I picked this book and my complete gratitude for the author for sifting through the minutia to offer us this lasting account with multiple perspectives from the cafeteria waitress all the way up to Nixon.

I'm not sure what it was overall that made me reduce my rating as the story dragged on... maybe it's because I ignorantly thought this was the story about Charles Whitman, or because I felt like the author made an effort to wrap a historical-event in modern-events cloak? In any case, the polarization made me uncomfortable for the entire second-half of the book. Was glad when the story ended.

Amazing narration of the events at Kent State. Sad to learn of the reaction the students got from the public and how the events affected activism.