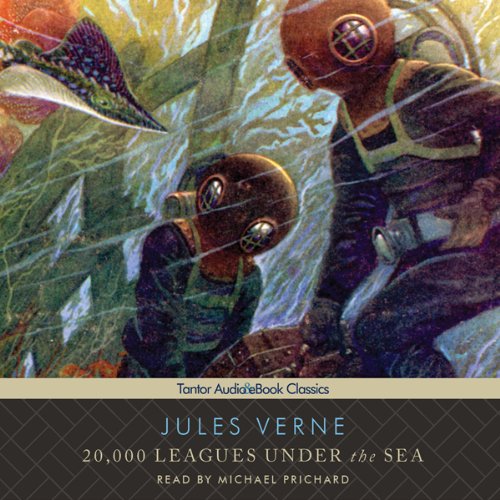 French Professor Aronnax and his servant join the Abraham Lincoln, an American frigate, on a mission to find and destroy a "sea-unicorn of colossal dimensions, armed not with a halberd, but with a real spur, as the armored frigates." The undersea monster is thought to be responsible for the disappearance of over 200 ships. When they encounter the "gigantic cetacean" it disables the Abraham Lincoln and knocks Professor Aronnax, his servant, and the hot-tempered harpooner, Ned Land overboard. The three must cling to the beast or drown; soon they realize that it is really a man-made underwater vehicle.

Captain Nemo captures the men on his incredible submarine, the Nautilus. The captain and his unwilling passengers thus embark on a deep-sea odyssey that stretches from the palm-strewn Indian Ocean to the frozen peril of the South Pole. But the enigmatic Nemo has a darker purpose for his voyage...revenge on humanity.

Not just a suspense ridden drama, this classic novel, written in 1873, predicts with astonishing accuracy the advanced technology and inventions of the 20th century and has inspired generations of science fiction writers.

A good naration of a classic story

This is a particularly good naration of this classic story by Jules Verne. The reader has a good speaking voice and does a good job with the different characters. The story itself is very complelling and enjoyable to listen to. This occupies a permanent place in my in-car collection as well as on my iPod.

This is a great story. Some of the technological wonders described in the book may seem a bit dated these days, but the sheer splendor of our protagonist's fantastic journey stands the test of time.

The narrator does an excellent job at pacing and changing the voices around - the scenes were flashing by in my head just as they would when I'm reading a good print book. He really brings Capt. Nemo to life.

This was the first Verne I'd listened to, and I didn't love it. I found the writing style dry and repetitive. I'm sure this would have played very differently to an 1870's audience, but I didn't find his ideas of a then-futuristic (but now old-school) machine to be compelling enough for me to enjoy the book. Interesting more as a historical document rather than a compelling story. No complaints about the production.

Enthralling epic and addictive, made fascinating by its historical outlook. Highly recommended and worthy or any avid reader.