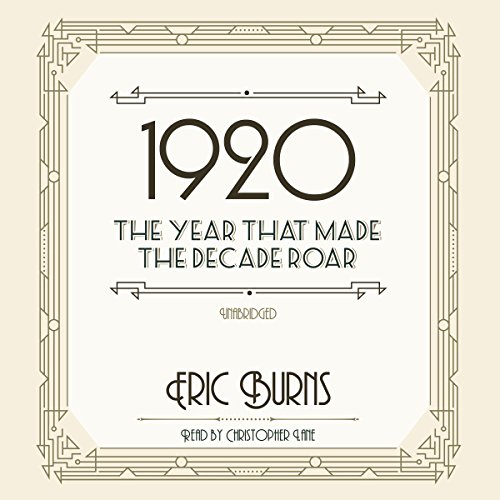 One of the most dynamic eras in American history, the 1920s began with a watershed year that would set the tone for the century to follow.

The Roaring Twenties is the only decade in American history with a widely applied nickname, and our collective fascination with this era continues. But how did this surge of innovation and cultural milestones emerge out of the ashes of World War I?

Acclaimed author Eric Burns investigates the year 1920, which was not only a crucial 12-month period of its own but one that foretold the future. The year 1920 foreshadowed the rest of the 20th century and the early years of the 21st, whether it was Sacco and Vanzetti or the stock market crash that brought this era to a close.

Burns sets the record straight about this most misunderstood and iconic of periods. Despite being the first full year of armistice, 1920 was not a peaceful period - it contained the greatest act of terrorism in American history to that time. And while 1920 is thought of as the beginning of a prosperous era, for most people life had never been more unaffordable. Meanwhile, African Americans were putting their stamp on culture. And though people today imagine the frivolous image of the flapper dancing the night away, the truth was that a new kind of power had been bestowed on women, and it had nothing to do with the dance floor.

From prohibition to immigration, the birth of jazz, the rise of expatriate literature, and the original Ponzi scheme, 1920 was truly a year like no other.

“And so the greatest nation on Earth was transformed into a third world nation in its tastes and values, and so it remains...” No thanks. I’m no hyper nationalist, but I stopped there. I downloaded this thinking that it was a history, but it appears to be a cultural critique.

So many events and people real and fictional crossed paths in 1920. Understanding the stories of the people, politics, events and challenges of 1920 brings surprising insight into the beginnings and endings of so many American beliefs, values, and attitudes. This is when the progress of the nation was redefined in so many way. Literature, art, social mores, even war changed in fundamental ways. Eric Burns weaves the many stories together in a magnificent way. It becomes impossible to stop listening. Excellent depth - very relateable perspective. Christopher Lee gives the tales their voice in a pleasant way. I'm looking forward to a sequel. I want the journey to continue! I believe we both graduated from Westminster College. Proud to have Eric Burns as a fellow alum.

I mistakenly thought this book was about the 1920s — as in the decade. While it did mention the years before and a few after to round out the story, it was mostly centered on all the events that happened in 1920. The narrator was fantastic. I usually listen in 30-40 minute spurts during my more walk. I learned so much!

I found this an excellent listen and was wishing it wouldn’t end. Informative with sweeping scope it maintained my interest all the way. I enjoyed the writers style, particularly his occasional gently sarcastic wit. The narrator was perfect for this work.

Author tries to be amusing by “teasing” reader with Paul Harvey style stories but never reveals anything before plunging into another tease.

I enjoyed the various topics withing this book- from New York 's Harlem to anarchists, to the suffrage movement. It paints a large picture of the entire American experience.

A highly informative, educational, and entertaining book. The narrator, Christopher Lane, is outstanding; one of the very best, in my experience.

1920s was an interesting decade

If you like listening to the early history of the 20th century, then 1920 is the book for you. It covers a brief period before 1920 and it delves into how World War I really changed everything in America.

I particularly liked the background on Woodrow Wilson and the impact he had on the decade to come.
Conversely I was appalled by Warren G. Harding. I never realized he participated in such antics.
And Calvin Coolidge was really a remarkable president because of his gentility and quiet demeanor.

Gangsters, anarchists, con artists, thieves, and revolutionaries pervade the story of the 1920s as characters who fill in the blanks about what really went on in the decade of ill repute.

This author writes extensively about all of these presidents and it adds to the backdrop of the story.

What was most disappointing about Eric Burns’s story?

Which character – as performed by Christopher Lane – was your favorite?

If you could play editor, what scene or scenes would you have cut from 1920?

For example, Margaret Sanger becomes Saint Sanger when Mr. Burn's picks up his quill. As Editor that nonsense would have been deleted and the bare facts about Ms. Sanger, or just to irritate her, Mrs. Sanger would have had no polish added.

Is it still worth the listen? Good question for which I don't have an answer.