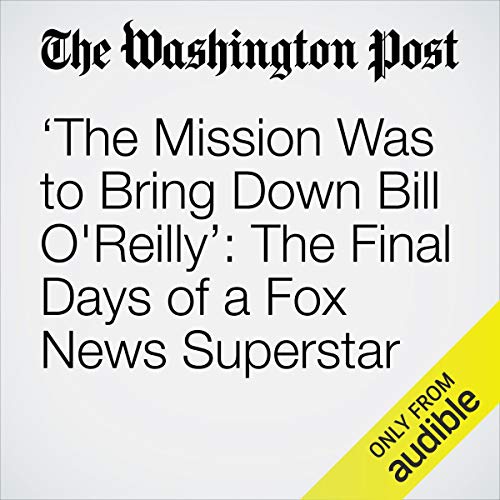 O’Reilly has called the claims against him unfounded and Fox has remained a ratings force.

"‘The Mission Was to Bring Down Bill O'Reilly’: The Final Days of a Fox News Superstar" is from the April 21, 2017 Style section of The Washington Post. It was written by Manuel Roig-Franzia and Ben Terris and narrated by Sam Scholl.

Cosa pensano gli ascoltatori di ‘The Mission Was to Bring Down Bill O'Reilly’: The Final Days of a Fox News Superstar

This is all about hate.

If Mr. O'Reilly did harass women what's new? The accusations are not worth anything without proof. I am still mad at Fox for not defending him or allowing him to defend himself, They just got rid of him because of the socialist and the haters. They tryed to do the same to our new supreme court judge. I'm so glad I didn't pay for this 11 minutes of nothing but more noise like CNN or MSMBC.

What disappointed you about ‘The Mission Was to Bring Down Bill O'Reilly’: The Final Days of a Fox News Superstar?

The issue of people being prosecuted in the news media.

What could Manuel Roig-Franzia and Ben Terris have done to make this a more enjoyable book for you?

I feel it would have been a more enjoyable read...if it were not written. That probably sounds rather odd. The writing is top-level; they know what they are doing. My issue is that I feel that the only way we can ever know the truth in matters of this kind is to have two people in a courtroom, under oath. This never happened. So, we are left with people such as Bill O'Reilly and others being given their day in court in the Washington Post. He may be guilty. But, until it is hashed out in a courtroom, this, for me, will be just he said, she said. The reporting is useless to me, no matter how well written.

Have you listened to any of Sam Scholl’s other performances before? How does this one compare?

I have never listened to Sam Scholl before, but I very much like his narration and hope to hear him again.